While there’s considerable focus on silver regarding what returns it can gain as an investment asset and as a hedging tool both valid applications, amidst sovereign debt risks and currency devaluations it’s helpful to zero in on the fundamentals of silver and how it plays next to gold, its precious cousin, and the more industrial-focused platinum and palladium. In light of China urging its citizens to buy gold (more on that key topic in a two-part series from Stuart on Monday), where does silver stand in all of this?

If there’s anything to say of silver’s performance in the ETF market, it’s all good. According to Bloomberg data compiled up to Feb. 11 and presented by ETF Securities in a recent presentation, silver has outperformed most of the other precious metals, key commodities such as Brent oil and equity benchmarks like the S&P. In terms of spot returns, the one-week return for silver stood the highest at 3.1 percent, compared to gold (0.7%), platinum (-1.7%) and palladium (-0.4%). The 12-week returns for silver stood at 91.9 percent, second only to palladium (94.5%).

Back to the fundamentals, however: investment and industrial demand, although playing off each other in different directions through the years (as the graph below shows), may be at odds with supply of the metal the rest of the year and beyond. (Just today in London, the silver spot price broke $32 per ounce, a 30-year high.) 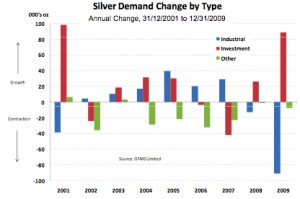 Although Will Rhinds, head of ETFS’ US operations, recently told MetalMiner in an interview that he sees no noticeable shortage of silver. “If people believe the mine supply of silver will fall this year, then some people can extrapolate that into something more extreme, he said. “But from our vantage point, we don’t see any signs of a visible shortage.

At first blush, that could seem to be at odds with the most recent outlook, presented by ETFS senior analyst Daniel Wills, who pointed out the relatively steady 2 percent growth of silver mine production from 2000 to 2009 may not be enough to offset the 86 percent decrease in above-ground stocks in 2009. Granted, Wills spoke based on data trends through 2009, while Rhinds may have more recent insight. 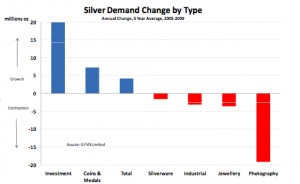 Whatever the supply situation at the current moment, it’s inevitable that we’ll be seeing unprecedented broadening of the silver demand spectrum beginning this year, if the above graph of demand sources is any indication, going by Wills’ conclusions. With high inflation concerns across the globe and sovereign debt risk in Europe (but let’s not count out Japan and the US as well), and with miners increasingly looking to hedge their metal buys, this period may make for an interesting silver environment. (The gold-silver ratio dipped below its 50-year average at the end of 2010 the last time it was that low, Reagan was in office.)

*For a much broader picture of the silver and gold investment environment, you can attend a free conference: Phoenix Investment Conference & Silver Summit on February 18-19, 2011.

Details contained in the referenced link.