A series of fascinating articles in the Economist delves into the phenomenon of additive manufacturing processes, or, as it is widely becoming known, 3D printing technology. In a cover story, the magazine shows a “printed model of a Stradivarius violin, completely functional and essentially spit out by one of these 3D printers; in a more in-depth follow-up in that same issue, the writers highlight the process itself, and the implications. (A third article, from 2009, focused on plastic prototypes.) Even the BBC has gotten on the bandwagon, with a piece about “printing out new ears and skin. For those not familiar with additive manufacturing, essentially, these “printers take a CAD design and create a layer-by-layer physical product from the specs, either by gluing plastic particles together or sintering metal powders via lasers or electron beams.

What we’re interested in, needless to say, is the metal-related side of additive manufacturing. The first step is grasping what these machines can do and how they do it, and the second is coming to grips with what it means for the manufacturing world. (Not to worry, the intent is not to glom on to the phenomenon as something fashionable, exciting or super-new we know that many manufacturers have been using additive techniques for some time now.)

Several companies have been making these 3D printers for years, from the pioneering 3D Systems in South Carolina, to leading US firm Stratasys in Minneapolis, reaching broad client bases — think aerospace to academe. But two European companies — EOS of Germany and Arcam of Sweden — are at the forefront of building machines that print metal end-use products, and not just prototypes, which used to be the majority of 3D-printed results. Arcam has two main metal-sintering machine systems (the A1 for smaller applications, and the A2 for larger ones, such as airplane parts) that make use of fusing metal powders together with an electron-beam melter. EOS rolled out their flagship EOSINT M 280 system that came out a couple years ago to replace its 270 model, which was already a market leader in metal additive manufacturing. According to the Economist, both EOS and Stratasys, which uses primarily employ plastic-deposition technology, “use their own machines to print parts that are, in turn, used to build more printers.

One EOS client that’s not a huge OEM (but supplies huge OEMs) is Morris Technologies in Cincinnati, Ohio. Incidentally, Morris was the first North American manufacturing firm to buy the EOSINT M 270 system, and runs nine of their machines in total the most of any lab or manufacturer in the world. They employ a variety of metal powders of both well-known (e.g. Ti6Al4V) and lesser-known alloys that are used for tensile strength, hardness and durability in machined parts. (More about Morris in Part Two of this series.) As of mid-2007, reports indicated that EOS printers and many other 3D-printer manufacturers were not able to use a diverse enough list of metal powders (it was four at the time). Now, according to the EOS website, there are nine different powders in use, including Aluminum AlSi10Mg. Arcam still lists only four that its machines can use Ti6Al4V, Ti6Al4V ELI, Titanium Grade 2, and CoCrMol ASTM F75. 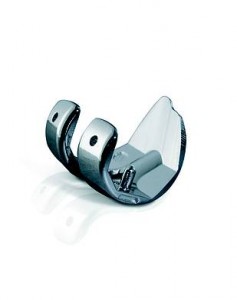 The above knee implant was built by Direct Metal Laser-Sintering (DMLS ®) using a bio-compatible Cobalt-Chrome alloy. Several such parts can be built fully automatically overnight, even patient-specific, by Stryker Orthopaedics. Source: EOS 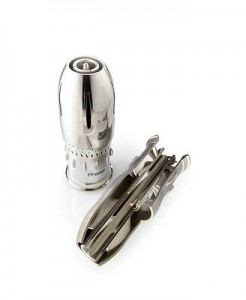 Above, a swirler (fuel injection nozzle) for gas turbine applications made from CobaltChrome MP1 by Morris Technologies, Inc. Source: EOS

According to several reports, it is clear that European design and manufacturing firms are more advanced at both creating and utilizing additive technologies than their US counterparts (especially in the medical and dental arenas). In addition to mid-range suppliers like Morris, firms such as Boeing, Airbus, and even NASA are already using systems from the likes of EOS and Arcam. But will additive manufacturing permeate heavy manufacturing stateside, seizing more and more clients? What does the future hold? And is the full replacement of traditional manufacturing even feasible?