Home | Commodities | Copper: In a Dip or On the Slide?
Commentary, Market Analysis

Copper: In a Dip or On the Slide?

A few months ago, the recent fall in the copper price would have been met with expressions of delight by copper buyers keen to take advantage of “buying on the dips in what was widely expected to be a bull run on the copper price. When the price topped $10,000 per metric ton on the LME last month, copper bulls’ optimism seemed entirely vindicated. So what should buyers make of the current price, which is back to the mid $9,000s, having slipped some 7 percent from it’s highs? Is this a dip to take advantage of? What is driving the price down (and is this just a temporary drop)?

A Reuters report by Melanie Burton points the finger of blame at unrest in the Middle East. More than anything, the speed of events and domino effect from country to country is causing widespread concern that oil supplies will be compromised and, with it, global growth. Even if oil supplies continue to flow freely, the rise in the oil price is seen as a significant likely driver of inflation which will dampen growth. Quoting Steve Hardcastle, head of client liaison at Sucden Financial, the report states: “Energy prices will impact consumption. They could also impact inflation levels in China, which means potentially further involvement by the Chinese monetary authorities.” Nor are just metal and oil prices affected — stock markets fell around the world with Wall Street having its worst day since August as investors turned risk-averse. That same risk-averse sentiment drove speculative holders of copper to liquidate positions contributing to price falls.

The above explanation, while entirely accurate, is only part of the wider copper story though. In a separate article, written by veteran Reuters metals columnist Andy Home, the latest International Copper Study Group (ICSG) monthly copper market report is used as the basis for a deeper examination of the global supply/demand situation. Using the ICSG’s approach, the copper market was 400,000 tons in deficit in the first 11 months of 2010, compared to a surplus in the same period of 2009. However, the ICSG calculates Chinese copper consumption as domestic production plus imports, plus/minus changes in visible stocks and exchange stocks. The devil comes in the imports figure, according to Andy Home — up to 500,000 tons of copper were imported last year and held by financial arbitragers. With demand from Chinese consumers driving demand and the copper price rising, these financial players were on a one-way bet; but as consumers have stopped buying, the arbitrage window has closed, as this chart form Reuters shows. 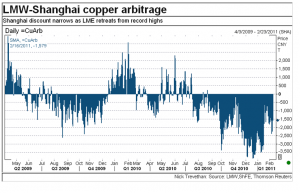 As the article points out, 500,000 tons of stock is more than is held in the entire LME warehouse system (or, looking at it another way, more than the supposed 400,000-ton supply deficit calculated by the ICSG). Which brings us back to how real this deficit is. If such a significant portion of the “demand is imports driven by the financial community and not consumers, how real is this deficit? With consumers staying out the market, physical premiums have collapsed to zero and metal — admittedly only in small volumes — has begun to be exported from China. South Korea is the nearest LME warehouse and stocks there have risen to 34,600 tons since the start of this year. If the trickle picks up it is almost certainly a sign that prices will have further to fall, so rather than jumping in to buy on the dips, copper buyers may be advised to keep an eye on those LME stocks, particularly in Asia, on the SHFE stock levels and on reported physical premiums. Further Middle East unrest or not, copper may be in for a period of consolidation — if not an extended decline — from current high prices.