Want to be (big “G”) green and classy? Well, you soon can be. Rolls-Royce is showing what promises to be the most luxurious (and outrageously expensive) electric car at the Geneva Motor Show this March. The new car, dubbed Phantom 102EX, is intended as a test bed for the new technologies required, or as RR puts it, “to gather the opinions of stakeholders, owners, the public and the media. Rolls-Royce will be asking potential clients to try the car to gather customer feedback get in line, because it’s likely to be by invitation. The company’s concern is that an all-electric Rolls should be an authentic Rolls Royce driving experience, so a silent motor should fit rather well with the traditional whisper-quiet Rolls engines — the firm’s literature once boasted that the only noise you will hear in one of its cars is the ticking of the clock. 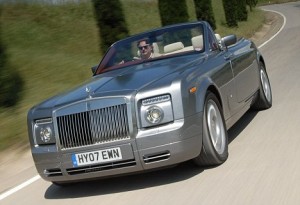 In fact, an electric Roller isn’t as outrageous as it sounds. The cars are notoriously heavy, so lugging a huge bank of battery cells around shouldn’t be out of place. Rolls models have not got any cheaper since BMW took them over, quite the opposite, but they have benefited significantly from BMW’s technological innovations; a move to an electric version is not as far attached as it would have seemed five years ago. A Daily Mail article opened with the statement that the luxury electric limo could cost 2p (3c) per mile to run, but would could cost up to £1 million ($1.6 million) to buy I would not have thought an owner who could afford to pay that kind of money would be bothered what it cost to run; instead, the issue for them would be whether the driving experience is better than a regular Rolls, and that will be the car maker’s challenge. The existing RR Phantom costs £300,000 to buy (nearly $500,000) and manages only 15 miles per gallon, not that it has stopped the firm selling record numbers, even in (or maybe especially in) emerging markets like China and India. The firm announced record annual car sales in 2010 — up 171 percent on 2009 and more than double the previous record of 1,212 cars set in 2008. In 2009 the company sold 1,002 cars. The US remained the biggest single market for Rolls-Royce in 2010, followed by China and the UK with all areas showing Ëœsignificant growth,’ particularly in Asia Pacific, the US and the Middle East, according to the Daily Mail article.

The idea is the new car will be available in time for the 2012 Olympics, but although the firm has a fully running experimental model, the leap to offering a finished article is such a major step that one has to ask if August 2012 is feasible. Possibly to assuage doubters, the firm has launched a website called www.electricluxury.com to allow progress and developments to be monitored.