What GOES Down Should Come Up In 2011

MetalMiner is pleased to re-introduce guest columnist Jack Taylor. Jack is an independent metals analyst and consultant focusing on ferrous and base metals used in the energy industry. Prior to working as an independent metals consultant, he worked at PowerAdvocate as an Energy Business Analyst and at Independence Investments covering the automotive and transportation sectors. He can be reached at JTaylorMA(at)gmail.com

In January I wrote about grain oriented electrical steel (GOES) market drivers and background. This month we take a look at the 2011 forecast for GOES. First, a quick recap on GOES market during 2010 to give us a bit of perspective on where prices could be headed this year: overall, power and distribution transformer prices rose 4.3 percent by the end of 2010 in response to an improving economy and escalating commodity prices. Power generation equipment shipments grew 10 percent (year-over-year) during 2010, yet, to put it in context, 2009 shipments dropped 22 percent as a result of a pullback in power consumption by end users, tighter lending policies to fund large scale projects, and an overall weak economy. Although transformer shipments were up, new orders received by some transformer manufacturers, such as ABB, slipped 13 percent during 2010 due to some buyers continuing to mothball projects or cut back on spending in 2011. Looking ahead, the GOES forecast was developed using predictive statistical models and over a dozen metrics. Major elements of the forecast are heavily weighted towards power construction spending, raw material prices and general economic outlook.

Current GOES pricing could rise 3.4 percent by the end of 2011, yet gains in pricing are not likely to occur until mid-to-late second quarter when further development of power projects could produce upward demand for equipment. Power construction spending by the end of 2011 is estimated by Reed Construction to rebound 9.8 percent, a strong improvement from -7.2 percent during 2010. Much of the growth in power construction spending is to come from renewable and transmission and distribution projects in the southwest and western states. Additionally, power spending should improve alongside capital markets as many financial institutions loosen lending terms as they gain confidence due to borrowers’ rising credit quality. 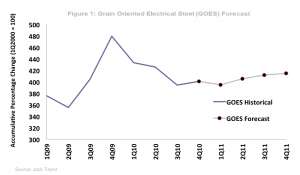 Climbing raw material prices should also contribute to upward trend for the GOES market in 2011. Steel prices have been estimated to increase near 12 percent this year, but could ascend higher if supply chain issues continue, as was the case in January, with numerous floods shutting down coking coal mines in Western Australia. Iron ore prices are also likely to escalate in 2011 as the Chinese government forecasted a 7 percent increase (671M tons) in steel production — a significant amount, given China produced 150M tons only 10 years ago where Japan, the world’s second largest steel producer, manufactured 108M tons in 2010.

Expansion of the U.S. economy should increase the consumption of electricity, which, in turn, causes delayed power projects to move forward and new ones to receive funding. As a result, the need for new transformers should go up as well, further increasing the demand for GOES. Recently, both Reed Construction and the National Association of Realtors predicted new housing starts to rise 8.3 and 7.1 percent, respectively, this year; that coupled with National Association of Business Economists revising their Real GDP forecast from 2.6 to 3.3 percent, are positive steps for a recovering economy.

One caveat that may alter the GOES forecast is concern around demand, as supply should remain somewhat stable in the short term, unless raw material prices spike, emerging markets start to build rapidly or more natural disasters occur. On the demand side, there is no assurance that private non-residential construction will shoulder the burden of the growth as most, if not all, of the federal stimulus funds are spent and Congress continues to debate new spending bills. Moreover, housing starts have been dismal over the past two quarters while unemployment struggles to stay near 9 percent, none of which are confidence builders. Lower demand for transformers wouldn’t immediately impact GOES due to long lead times. However, GOES price drops are likely to follow declines in the steel market as we saw during the first half of 2009 when steel market plummeted in response to the economic crisis late third quarter 2008. All of the factors above, coupled with a custom forecast model, led to the modest growth number prediction of 3.4 percent.