In light of MetalMiner’s first conference on international trade policy (if you missed it, read the live conference blog here and here, and Spend Matters’ take here), we thought it apt to cover a few topics at the intersection of hedging against sovereign debt and political risk, and international trade.

As to the headline of this post: the intersection between gold and non-precious alloy may seem a slight bit, well, constructed, or forced, or out-of-the-blue, but whatever term you choose, and whether it naturally dovetails or not, the connection is worth mentioning.

Gold prices are still being buoyed by sovereign debt concerns in Europe and elsewhere, as well as Middle East uncertainty and how it could continue to affect currency markets. Reuters reported that the spot price in Europe hit $1411.15 at the beginning of the week, against the New York trading price of $1409.15 just before last weekend. Mideast unrest was cited (see graph below) as the main driver of the price. In fact, gold is set for its biggest one-month increase since August 2010, although many analysts hesitate to predict a new record high, according to the news organization. With China encouraging its citizens to buy up gold and its federal banks already sitting on 1054 tons, gold prices are unlikely to take a dive anytime soon. 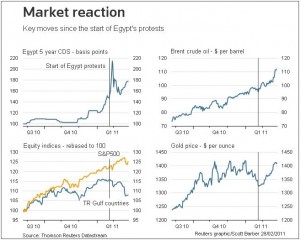 Last week, Daniel Wells of ETF Securities indicated in a conference call that due to an unsteady Eurozone economy and Mideast turmoil, gold prices will keep rising. The 8 percent net gold outflows from ETF funds seen this past January have just begun to turn around, according to an ETFS report; the first net inflows were seen in the second week of February. (Partially, this is due to the spot price of the metal going up 5 percent between Jan. 27 and Feb. 18.)

Also, central banks are increasingly becoming very important players in the gold market. “The official sector has become a net purchaser of gold, Wells said. “[The sector] has swung from being a main supplier of gold to a main driver of demand.

Where does gold go from here?

“I think there is a high probability that we are going [to hit gold’s old high of $1,434 an ounce], said Phil Streible, senior market strategist at Lind-Waldock here in Chicago, being quoted in The Street. “It’s just a matter of when. I think it could be easily in the next couple of weeks.”

#2: So what does this have to do with non-precious metal alloys being used by dentists? Continued in Part Two.