Platinum Demand – and Ensuing Prices – Ripe For a Bounceback

In line with Stuart’s and my recent articles, palladium is hot, and platinum not so much. (In saying that, I am, of course, speaking rather relatively.) While Middle East unrest and European sovereign debt concerns push oil prices beyond $100 a barrel and gold prices are at all-time highs, other precious metals may be overlooked especially those with primarily industrial uses. But the rolling Chinese auto market is doing its part to keep PGMs in the spotlight. 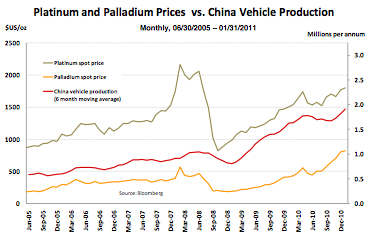 Platinum spot returns are up 18 percent over 12 months, which pale in comparison with palladium (86%). According to an ETF Securities report based on statistics compiled from Bloomberg, outperformance of platinum prices in early 2009 saw the platinum to palladium ratio reach historic highs. Palladium prices caught up by the latter part of 2009 and continued to outperform in 2010, causing the platinum-palladium ratio to fall to its lowest level in 9 years by February 2011.

This “pretty much reflects a slightly larger supply surplus in the platinum market that evolved in 2009 and 2010, said Daniel Wills of ETF Securities. The surplus did shrink in 2010, however. Overall, the disparity in the platinum-palladium ratio, marked by the swift run-up in palladium prices, bodes well for much better performing platinum prices in 2011.

“Palladium’s love affair will continue, but platinum will attract more interest than last year, said Edel Tully, an analyst at UBS, citing a stronger rand, rising mine inflation and supply risks in a recent Kitco report. South Africa, the world’s leading platinum producer, battles perpetual electrical power issues, and is also dealing with “strikes and safety-related stoppages at a number of the country’s mines. Tully said UBS forecasts an average platinum value of $1,905 per ounce for the rest of 2011 (which is short of the $2,000/ounce threshold that many South African miners consider spurring production) and $1,950 for 2012.

Platinum’s greater supply surplus as compared to palladium may also be moot due to Russia’s secretive stockpiles of the latter, keeping it under wraps as classified information. If it’s considerably more than investors think, then palladium’s higher price may come down. Russia produces just over half the world’s palladium, according to Johnson Matthey data. However, said ETFS’ Wills, there is less evidence of a palladium surplus (or Russian stockpiles being lower than widely expected and thus playing less of a role) in 2010, when Switzerland a key European hub for storing and trading of precious metals reported that the Russian shipments they received represented only a third of the twenty-year average. 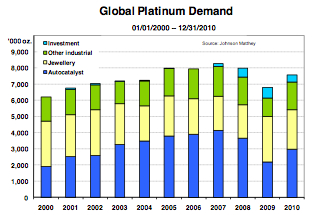 Investment demand for platinum is slowly but surely growing over the past three years or so averaging 7 percent of total demand from 2008-2010, against only 1 percent from 2005-2007, according to Johnson Matthey and represented by the light blue in the graph above. But total holdings considering both net inflows and outflows of the white metals over the past two months have remained rather stagnant. However, taking a more historic view, the uptrend of platinum and palladium physical ETF holdings over the past three to four months has continued mainly because of the US doing much more heavy lifting on the manufacturing side in addition to emerging market demand growth, Wills said. (The Fed’s implementation of QE2 also had a partial effect on this.)

“It’s been difficult to expand mine production for platinum over the past five years, and at the same time, there isn’t the same level of recycled platinum or palladium as there is in the gold marketÂ¦it’s been a rather fixed supply growth, said Wills.

The current economic landscape certainly serves as an indicator for where platinum may go. High oil prices, for example, encourage the purchase of diesel vehicles, which require higher platinum loadings than gasoline engines. The expected drop in Chinese car sales growth this year compared to 2010, as initially forecast by the China Association of Automobile Manufacturers, may also push prices the other way. From what we can see, even slightly slowed auto demand in China will continue buoying the need — and the price — for platinum. Palladium’s more upmarket cousin just may be due.