A recent CRU report outlines the attractiveness of tin as an investment vehicle, but uses the supply/demand picture to show that the (perhaps) over-reported supply tightness resulting from Indonesian production shortfalls may not be the end of the story.

Because tin commands such a high price per ton, and because of its recent entry into the physically backed base-metal ETF sphere, among many other factors, the LME cash price as of this writing stood at $31,745 a ton, well on its way to historical 1980s highs (in real prices, using the Dec. 2010 value of the USD). According to the report, tin’s very strong supply/demand stance is supported by more technical buying based on its upward trajectory and a decrease in hedge selling, making it an investor favorite.

From a supply-side standpoint, the main reason that supply is not as tight as initially predicted is that China is unloading an excess of the metal on the rest of the world, mostly due to the large premium of the LME price over China’s domestic physical price. (The country continues to be the largest global refined tin producer.) Secondly, high prices alone are keeping the demand-supply cycle going; higher prices spur an incremental increase in supply, which eventually may cool demand, and so on. Thirdly, even though larger tin mining projects are two to three years away from operation, small-scale production and recycling have been picking up. ITRI estimates that the global tin recycling rate to secondary refined pure metal is around 8 percent, and a United States Geological Survey report noted 14,000 tons of recycled tin in the US in 2010.

For context, and for an example of how China truly drives the global tin market, let’s take a quick look at how their production numbers stack up against the rest of the world. Here’s a graph of the top 12 tin companies in 2010: 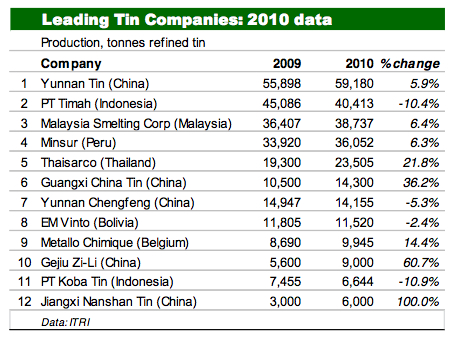 On the consumption side, tinplate usage which is, I think safe to say, may be of more interest and use to industrial-minded MetalMiner readers than other applications for refined tin has experienced a 9.1 percent increase year-to-year from 2009 to 2010 (after down years in both 2008 and 2009.) ITRI estimates the total tinplate usage in 2010 to be 58,800 metric tons. For more background on the tinplate market, check out what Rodrigo Vazquez, founder and senior vice-president of Harbor Intelligence Tinplate Unit, told MetalMiner back in February.

Back to the investment side, all of this means that the physically backed tin ETFs may be picking up as well. After a slow last December, with 180 tons held by the end of January, ETF stocks in Malaysian and Singapore warehouses went up to 405 tons by the end of February, and could be growing more as LME stocks are slowly dropping.

The Democratic Republic of Congo is a continent and a half away from China; where does the DRC stand in all of this? Check back in tomorrow for Part Two.