Russia Gripped In a Deep Freeze

The Russians are a hardy lot; you have to hand it to them. They suffer abysmally cold winters with rarely a grumble and without many of the creature comforts afforded those in equally cold yet more affluent parts of the world like Alaska and Canada. Russia’s travails this year, though, have been especially severe. Our attention to the situation was drawn by a photograph sent to us by our shipping agent by way of explanation for the delay in some containers we were moving from Russia to western Europe. The agent clearly adhered to the old phrase, “a picture paints a thousand words,” to explain why the containers had been stuck at the docks for   10 days and not shipped. 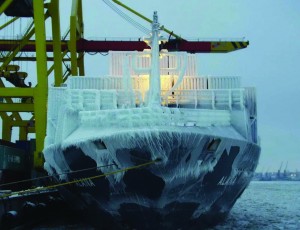 The St Petersburg Times confirmed his story, saying temperatures dropped to -26 degrees Centigrade (-15F) during February and events like the St. Petersburg section of Ski-Run of Russia 2011, a mass nationwide ski race that was set to attract more than 500,000 participants, including an estimated 15,000 from St. Petersburg, had to be canceled due to the cold.

Suicide rates are quite high in Russia, but one 34-year-old man was unsuccessful in adding to the statistics when he jumped from a 13th-floor window on Repishchevaya Ulitsa in the Primorsky district of St Petersburg. He found his path to oblivion blocked by a particularly dense pile of snow. So soft was his landing that he was able to get up and return to his apartment, before eventually being taken to hospital it’s unclear if he was admitted for depression or the results of the fall.

To underline just how serious the consequences of the cold weather have been, BSR Russia reported that for the first time in 20 years, Moscow will not celebrate the Irish national holiday with a traditional St. Patrick’s Day parade (which had grown to be one of the biggest in Europe after Dublin and London). Instead, an indoor event is planned.

On a more serious note, it would appear that the cold weather in Russia and the floods in Australia are to some extent linked and had in large part been accurately predicted by US climatologist Evelyn Browning-Garriss in her Browning Newsletter, reported in the Telegraph newspaper last month. According to Ms. Browning-Garriss, a string of volcanoes in Russia’s far eastern Kamchatka region has been erupting continuously for the last six months of 2010. The dust they threw up diverted winds in the Arctic, pushing cold air over Europe and North America and causing the unusually cold winter in the US this winter. Meanwhile La Nina has been lowering temperatures in the southern hemisphere and crop yields have been down in Australia and South America. The volcanic activity is likely to subside somewhat in coming months and with it the dust clouds, so this winter’s cold weather is unlikely to be repeated next year. The good news is our container ship should thaw out sometime soon and the containers be delivered, we will make sure we wear gloves when we unload!