As investors in precious and base metals manufacturers and metal producers certainly among them begin looking toward ETFs as a viable alternative to hedging their metal buys, it may behoove them to look at the recent activity surrounding gold and silver, not only individually, but the trending relationship between the two. 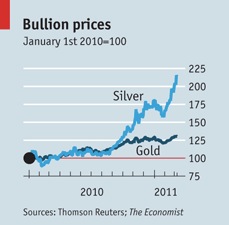 Nicholas Brooks, the global head of research and investment strategy for ETF Securities, sounded reasonably sure last Thursday during a conference call that prices, and therefore returns, on the two precious metals are going nowhere but up.   “In today’s environment, with fiscal account and sovereign debt issues, I suspect gold and silver will benefit from that on a medium term basis, Brooks said.

Indeed, investors held their breath as the US and the rest of the international community debated a “no-fly zone for Libya as Col. Qaddafi’s forces and their opponents continue clashing, which not only sent gold higher, but also sent silver holdings in The iShares Silver Trust (the largest silver ETF in the world) to a record high, according to Reuters.

“I think silver is only chasing gold. Some people think silver could reach $100. But I guess it needs to surpass $40 first before hitting a new high,” a precious metals dealer in Hong Kong told the news organization.

The gold-silver ratio has been dropping significantly as silver has continued its streak (although not without its bumps along the way). The spot price of silver — $35.72 an ounce as of Mar. 10 — puts the ratio relative to gold now at about 40:1, dipping below that magic 50:1 mark and well below the average 60:1 that’s been prevalent over the past 30 years or so, writes Brad Zigler from the research-oriented site Hard Assets Investor.

Zigler gives us a refreshingly phrased reminder of the gold-silver ratio’s meaning. “The ratio, which describes silver’s buying power by dividing the per-ounce price of gold by that of silver, has averaged 60:1 over the past 35 years, meaning it’s taken 60 ounces of silver to purchase one ounce of gold. Though with silver’s most recent push to the $36/oz level, it now takes much less.

But there may be a correction point due very soon for silver. “Based upon silver’s outperformance, fueled by investment and industrial demand, there’s still room for some downside for the ratio, he mentions. “Amid the turmoil swirling in North Africa and the Middle East, safe-haven demand for gold could outstrip silver’s industrial-driven demand.

Since silver is much more of an industrial metal than gold, look for other macroeconomic factors — the volatility in oil prices for one, and the reported February trade deficit in China for another as signs that the silver price may indeed force the gold-silver ratio back to a more historical average in the foreseeable future.

PREVIOUS POST:
How to Wean America Off Foreign Oil
NEXT POST:
In Wake of Japan Tsunami, Is Global Nuclear Power Freeze the Answer?