Advancements in the aircraft industry nowadays seems so often to point — depressingly, for an aluminum fan — towards the use of composite materials as the way forward to reduce weight, fuel consumption and hence, drive economies, while, if possible, making the flying experience a little less onerous for the passenger. So it was encouraging to read an Economist analysis of two groundbreaking (maybe that’s an unfortunate term in this context) developments in aircraft design that at least for the next ten years would favor aluminum use over composites simply because of its greater knowledge pool in what could be the introduction of new concepts of shape and form. 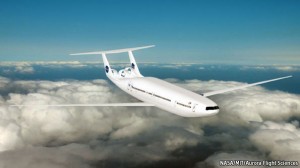 Setting the scene, we quote from a section of the article that illustrates why more radical approaches are now required. The first Boeing 737 was launched in 1967 and could carry about 100 passengers a total of 1,725 miles. By developing more efficient turbofan engines, lighter structures and aerodynamic tweaks like wing tips, a modern version, the B737-800, can carry nearly twice as many passengers twice the distance, while burning 23 percent less fuel (48 percent less on a per-seat basis). Still, the plane looks much the same as the original and many designers are coming to the opinion that they are on to a law of diminishing returns with the existing cylindrical shape, tall tail and two or four engines hung under the wings. So two teams, one at MIT in Cambridge, Mass., and another at Imperial College, London, are working on radically new designs. A brief sidebar on the flying wing concept explains some of the limitations designers face, though. The flying wing, much discussed over the last 20+ years, has attractions in terms of efficiency, but seating passengers in cinema-type blocks of seats puts those in the middle far from a window and more importantly, far from a door. Whatever design evolves, the basic premise of evacuating everyone from half the exits in under 90 seconds must hold; a tough proposition in the flying wing.

MIT’s solution appears to have the most promise. By taking two half-tubes and joining them together with an unturned nose, the designers have created a wider plane with much more lift. Combine this with rear engines and a twin tail, and it allows much thinner (lighter) wings and a smaller tail weighing some 70 percent less than the current engine under wing configuration. The huge tail on conventional airplanes is there to control the aircraft in the event of extreme yaw should one engine fail; with the engines at the tail, this is not required. The team has developed two options, the D8.1 version (which could be built conventionally, from aluminum) would use 49 percent less fuel. The D8.5 (similar, but constructed from composite materials expected to be available by 2035) would burn 71 percent less. With fuel being the highest operating cost for all passenger aircraft, this would make a major impact on airline viability.