The Iron Ore – Scrap Correlation: Does it Correlate to Steel Prices?

That famous ad campaign, “What happens in Vegas stays in Vegas, no longer works in steel markets. During internal discussions here at MetalMiner for the past 12-18 months, I and my colleague Stuart have bantered back and forth regarding the impact of iron ore and coking coal prices in China and their relationship (or lack thereof, depending on one’s viewpoint) to scrap prices here in the US and vice-versa. Last year, the relationship appeared less than “fully correlated, to use a statistical term. But no longerÂ¦

This past September I spoke at this event covering metals markets, where I met Roger Bassett from Plymouth Steel, who put forth a concept I had not heard articulated this way: all raw materials can be compared via “steel making units. By that, I can assume he referred to the notion that essentially key raw materials essentially become “fungible, meaning the trends in one ought to correlate with the trends in another. So as iron ore prices rise, one might expect scrap prices to follow suit.

But to understand how that trend actually correlates, we turn to an extremely informative website put out by steel producer Gerdau. In the chart below, though we can see a tight correlation between scrap and iron ore prices in China halfway through 2009, the price trends appear to have drifted apart throughout 2010, but now may head back toward a convergence: 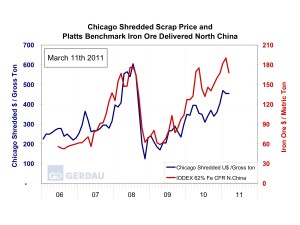 Gerdau points to weakening demand from China buyers for iron ore and, as we recently reported, steel prices in China have correspondingly also declined due to a mix of factors including rising oil prices, poorer demand for construction related products and rising iron ore prices set to increase, according to our earlier story.

Chinese finished steel prices certainly have eased of late, particularly for construction-related products such as rebar and beams, whereas prices for cold rolled steels, used more in automotive and white goods have merely plateaued: 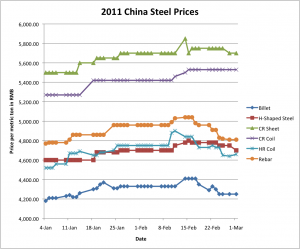 If we were to superimpose our MetalMiner IndX chart of China steel prices to the US domestic steel prices, we would see a tight correlation (which is not to say that the prices were the same, merely that both markets appeared to follow a close price trend). They both moved in similar fashions. Today, we have a dichotomy in that the US market appears to still have upward price momentum (or as some believe, has started to plateau) but the Chinese market appears to have declined through the first part of this year and now plateaued.

We’ve stated why we believe Chinese steel pricing has seen downward and now plateauing price momentum. But here in the US, we still see prices ratcheting up (at least through March 14, according to Steelbenchmarker) though the economic outlook remains full of mixed signals — e.g. poor housing starts in February, against decent automotive demand and continued PPI strength. As is often the case, markets often move before reality sits in China steel prices may have declined in advance of Chinese monetary tightening and US prices may have improved based on a few positive economic indicators.

Can the divergence in steel prices between the US and China be explained via the iron ore/scrap correlation (or lack thereof)? Probably not — but no matter, we’ll keep watching all the correlations.

PREVIOUS POST:
(Yet Another) Case For and Against Gold
NEXT POST:
Aluminum Prices: Bucking the Metals Market Trend