Aluminum buyers may have been watching in frustration as the light metal has seemingly defied the drop in other metals spurred by events in the news over recent weeks. As the following chart from our MetalMiner IndX illustrates, prices for zinc and tin have dropped dramatically over the last 30 days; so has copper (by 10 percent), but with only two scales we couldn’t fairly illustrate copper without losing the significance of the >10 percent fall in tin prices. 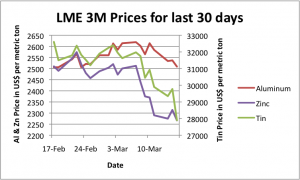 Aluminum ingot prices have actually risen over the last 30 days and fallen back only to where they were at the start. All other metals, along with shares and even the oil price, have taken a hammering from events in Japan, as a Reuters article points out. Aluminum has become the defensive play in the peculiar set of circumstances the markets are experiencing. The article argues that where other metals have been depressed by rising oil prices and Middle East unrest, aluminum has been supported, and then goes on to explain how, and crucially, why it may not last.

The Middle East is a major and rapidly growing area for aluminum production. Although no production has been impacted yet, Aluminum Bahrain’s 860,000-ton-per-year Knuff smelter were at pains to state in a Mineweb article that production was unaffected by the riots in Bahrain; other major smelters are in equally volatile regions. Saudi Arabia’s Maaden smelter at 740,000 tons is due to come on stream in 2013 and Qatar’s Qatalum smelter should reach its 585,000 tons per year capacity by June this year.

Annualized production rates for the region are 3.18 million tons, up 42 percent year on year. Disruption here could have a major impact on global supplies.

Related to the above, aluminum has always had a rather nebulous relationship with energy prices. Because energy can make up nearly half of the cost of aluminum production, rising energy costs can have the effect of encouraging smelter closures as high power cost or marginal capacity is priced out the market. For this reason, aluminum is actually seen as a hybrid metal-energy play by the market, according to Reuters’ Andy Home.

Lastly — and distinct from the Middle East — China’s national output is said to have slumped by the equivalent of 2.65 million tons in the second half of 2010 to 14.67 million tons, due to Beijing’s electricity rationing, as this graph shows.

Having said that, expectations are for a surging return of capacity as rationing is relaxed, severe weather has so far delayed that process with January’s increase a modest 212,000 annualized tons and preliminary estimates for February of about 500,000 tons. That is still some 2 million tons below last July’s record 17.32 million tons, but the trend is upwards and expected to continue if aluminum prices stay at or above current levels.

So the aluminum price is finely balanced by support from the investment community looking at the cost of production and risk to Middle Eastern production capacity and the as-yet unknown effect of returning Chinese production. The last few days have seen prices weaken as a realization that Japan, the world’s largest importer, is going to exhibit reduced demand for a period of 6-9 months. But short-term concern is balanced by an expectation that demand will soar when reconstruction gets in full swing.

What a conundrum. Buyers will be watching their news screens to judge which factors dominate in the coming weeks.