As the DOE’s Industrial Technologies Program has a hand in funding or guiding most of the following research on how to reduce steelmaking emissions, the latter half of the report detailing the new technology options reads much like a commercial at times; nonetheless, some of the efforts are worth detailing.

Hydrogen infusion and electrolysis processes have proved to be good reducing agents in producing iron, therefore taking down energy intensity considerably, and have been proposed to take the lead in overall emissions reduction in the steel industry. The American Iron and Steel Institute and the University of Utah undertook efforts five years ago to reduce emissions in the hydrogen reduction process of making iron. They primarily addressed material and energy balances, chemical calculations, evaluating behavior of impurities, and testing a simulation of the reduction process, which proved viable. 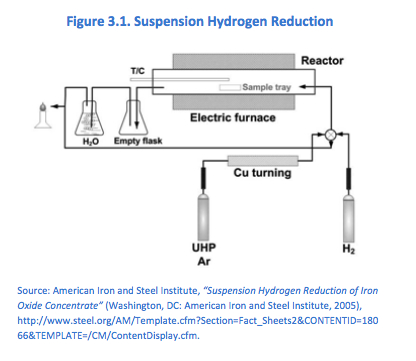 Electrolysis, on the other hand (used in aluminum production), emits no carbon as a process byproduct whatsoever. The AISI is also involved in this development (along with MIT), as is the Ultra-Low Carbon Dioxide Steelmaking (ULCOS) European consortium. 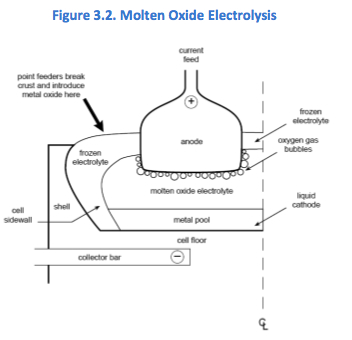 Another proposed technology, which may sound more familiar to those outside the industry, is carbon capture and sequestration (CCS). Although equally intriguing and mind-blowing the physical capturing and storing CO2 in various places, such as under the ocean the DOE study admits that the economics behind it are sketchy at best. Indeed, it would cost companies and taxpayers a lot of money in the short- to medium-term, not to mention decrease efficiency of energy production, as outlined in my colleague Stuart’s May 2010 post. US DOE Office of Fossil Energy research from 2007 put the cost of capture at $150 per ton of carbon using today’s technology. These costs, according to other studies, would level out over the next two or three decades.

Granted, capturing carbon emissions from the steel industry is admittedly a much smaller endeavor than doing the same for the electricity generation and thermal power production industry as a whole, which makes up nearly 70 percent of all US CO2 emissions. Also, the nature of carbon emissions from steel production is different the Industrial Technologies Program points out that highly concentrated C02 emissions can be “easily captured from flue gases. In essence, the capture of carbon will be more fully and seamlessly integrated with steps in the steelmaking process, unlike burning coal for electricity. Ultimately, however, the costs involved and implications of it must nonetheless be fleshed out. To quote from the report:

“It will be very difficult for the steel industry to meet the CO2 emissions reduction goals called for in proposed climate policies. Available reductions using best available technologies amount to a mere 12% of current emissions intensities, while proposed policies call for 50%80% economy-wide reductions.

One thing is clear: US steelmakers will have to incur hefty costs monetary and otherwise to comply with recently imposed governmental emissions standards.