Home | Commodities | Silver: How Much Further Has It Got to Go?
Commentary, Market Analysis

Silver: How Much Further Has It Got to Go?

An article in Mineweb last week reported that silver imports in India had dropped off dramatically this year and suggested the high price may be to blame. Silver imports into India from April 2010 to February 2011 dropped to 343 tons from 451.5 tons in the same period of 2010. The largest precious-metal importing region is Gujarat, where nearly 162 tons were imported in January, but dropped over 70 percent in February to 47 tons and were reported by an official of the Gujarat State Export Bureau as reaching on 16 kgs in March, by the 18th. 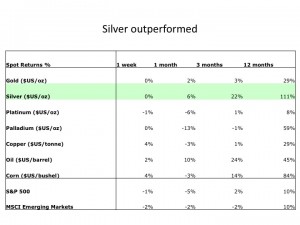 Indeed, what this table underlines is that relative to gold, silver has been the preferred investment choice. One of several trends in silver favored among the investment community is silver’s relentless return to form compared to gold as expressed by the gold/silver ratio. As a Telegraph article explains, when gold and silver were used as currency it was recognized that 16 ounces of silver had the same degree of purchasing power as one ounce of gold, creating a 16:1 silver/gold ratio. 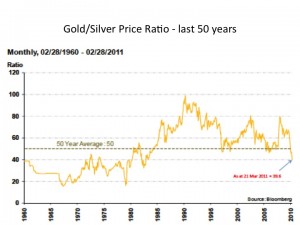 The last time that ratio stood was briefly in the late 1970s; since then, as this graph from ETF Securities illustrates, the ratio has been as extreme as 100:1, and in the more recent past, 80:1, with a long-term average around 50:1.

Like gold, silver has benefited from safe-haven status following unrest in the Middle East, economic problems in Europe and global debt worries. Holdings in the iShares Silver Trust, the largest silver exchange-traded fund (ETF) in the world, increased by 179 tons to 11,140 tons in the week to March 24. Gold holdings in ETFs fell over the same time period.

Does this drastic collapse in physical demand and a breaking of the long-term average ratio to the downside signal an end to the current bull run? It is logical that silver would outperform gold in times of recovery. Its greater industrial use, increasingly in electronics and semi-conductors, benefits the metal in times of upswing, whereas gold favors unrest or uncertainty. But while there are those that question whether silver is gaining something of a bubble status and is due a correction, farther east, physical demand is still strong and may quietly be supporting the market. Since October 2009, China stopped exporting physical silver, and since that time, silver has not dropped in price. Reports mentioned in the Telegraph say China imported more than 100 million ounces of silver in 2010, although is suggests only 2.6 million ounces was as pure silver, suggesting the country is buying up ore and refining domestically. This would explain the widely reported tight mine supply market.

Much will depend on physical buying of pure metal and ores by both India and China in the months ahead. Silver may indeed be due a correction, and like all commodities prices, can only rise so far and so fast before a correction becomes due, but providing Indian demand returns and China continues to consume at current rates, it is hard to see a collapse in the silver price even from these heady levels.

PREVIOUS POST:
Economic Health of Manufacturing Rides on US Senate's EPA Vote
NEXT POST:
Tin: Where To Now?