While all the other metals have been adversely impacted by a combination of factors, namely the rising oil price, aluminum has remained remarkably well supported. So the theory goes, a rising oil price is negative for business, increasing costs like a form of tax. As costs increase, eventually the consumer pays and consumption falls, so why would aluminum prices continue rising and how robust are current price levels in the medium term? 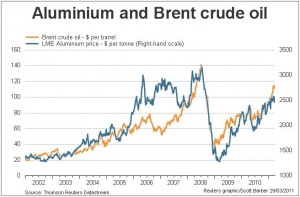 As this graph shows, although virtually no aluminum around the world is smelted from electricity generated from oil, the aluminum price has tracked Brent crude — the most widely used measure for the oil price outside of the US — faithfully for the last five years.

At first sight, aluminum has also become divorced from the usual supply-demand equation of high stocks/low prices and low stocks/high prices. As the following graph from Reuters shows, as the aluminum price started to fall even before the onset of the financial crisis in 2008, stocks rose as the market responded to a new investment opportunity in forward selling and warehousing as lower metal prices made the model viable. 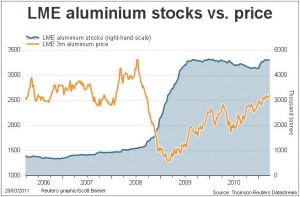 Contrary to many predictions of the imminent demise of this feature (in this column too, I should add), it still persists today and has continued to support the aluminum price. As the wider market came to realize that the true level of inventory available for consumption was only some 25 percent of the whole and that in practice the market had little more at its disposal than the level around the middle of the decade, the price has recovered. As the forward price premium available on the LME (Dec-2012) has recovered from $90/ton at the start of February to $120/ton now, financing deals have become more attractive, increasing the probability that current deals will be renewed when they mature.

Currently, the price is being supported by a number of factors beyond just prompt availability. Firstly, unrest in the Middle East is spreading slowly yet steadily from one regime to another. Among major aluminum-producing countries, only Bahrain has been seriously affected so far, but even there, aluminum production has been spared any impact. The fear is Qatar, Dubai or Saudi Arabia may succumb to popular unrest, which could impact some of the lowest-cost production in the world — even one plant idled at these massive investments could take 750,000 tons of annual production off line.

The greater influence to the price, though, seems to be the cost of energy as reflected in the oil price. Investors’ eyes have particularly been on China of late, home to 40 percent of the world’s aluminum production and consumption. According to a Reuters article, Beijing is considering its first electricity price increase from generators to grids since 2009, which could start in April, and in the news organization’s opinion, could curtail aluminum output as Chinese producers find their profit margins squeezed.