Following our two-part article on the price of oil and the consequences for global growth posted April 12, it was interesting to see a Reuters article that reported Goldman Sachs’ recommendation to clients to exit oil positions. Specifically, Goldman Sachs warned clients on Monday to lock-in trading profits before oil and other markets reverse, with the bank’s estimates suggesting speculators are boosting crude prices as much as $27 a barrel. Oil prices promptly dropped 3 percent as speculators anticipated Goldman’s clients would liquidate positions. Goldman’s advice came after US oil futures have risen some 20 percent this year and the bank was advising clients they should close their CCCP basket positions, taking profits on a trade that has returned 25 percent since first recommended in December. The Goldman “CCCP basket” trade encompassed a basket of commodities weighted 40 percent toward U.S. crude oil, 20 percent toward copper and 20 percent toward the S&P GSCI platinum index, with 10 percent in both cotton and soybeans.

Since the CCCP basket covers certain specific metals, oil and agricultural commodities, it can’t necessarily be taken as a call that all commodities have peaked, but a closer examination of Goldman’s advice on the leading constituents suggests the bank expects all metals to be impacted by what it sees as a short-term correction in the long-run bull market. Quoted in the Telegraph, Jeffrey Currie, head of the banks commodities team, said with reference to the oil price, “Not only are there now nascent signs of oil demand destruction in the US, but also record speculative length in the oil market, elections in Nigeria and a potential ceasefire in Libya that has begun to offset some of the upside risk owing to contagion, leaving price risk more neutral at current levels. According to Reuters, Goldman estimated in a research note on March 21 that every million barrels of oil held by speculators contributed to an 8-to-10-cent rise in the oil price. As unrest spread in North Africa and the Middle East, investors accumulated the equivalent of almost 100 million barrels of oil between mid-February and late March on top of their existing positions, confirming our Monday article view that this was adding approximately $10 to the ‘risk premium.’ 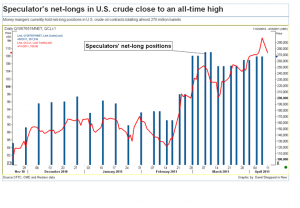 The article went on to say the U.S. Commodity Futures Trading Commission had advised hedge funds and other financial traders to hold total net-long positions in U.S. crude contracts equivalent to a near-record 267.5 million barrels, as the above Reuters graph illustrates. According to the bank, that indicates the total speculative premium in U.S. crude oil is currently between $21.40 and $26.75 a barrel, or about a fifth of the price.

The bank believes there is still near-term upside in soybeans, but it noted that copper and platinum prices faced “headwinds,” not just because high prices were cutting demand for the metals, but also that they were exposed to supply chain problems resulting from the earthquakes in Japan. This is particularly the case for platinum, given its large exposure to global automobile production. Goldman Sachs was quite specific about other commodities, saying they recommend clients hold positions in ICE gas, oil, gold and — confusingly — soybeans. Of the five items in the basket, only soybeans justifies holding onto, in the bank’s opinion.

No mention is made of the prospects for aluminum, zinc, nickel, lead or tin as these aren’t in the CCCP. The case against copper and platinum is fairly specific in each case; copper due to substitution and platinum due to automotive demand in Japan. Arguably the same could therefore be said of tin consumption in electronics, Japan’s other major industrial output, but the figures don’t suggest that electronics globally have been sufficiently impacted to dent tin consumption, added to which the supply market is going to remain tight for the foreseeable future, supporting prices. Lead, however, has been riding at least in part on the back of strong automotive growth and could arguably be impacted, as could zinc, used in galvanizing car bodies, although demand from other sectors outweighs automotive. Neither metal, though, has enjoyed a strong speculative element to its price position. Aluminum is probably the most exposed to a drop in the oil price. The metal has been a power hedge rising as the oil price has risen due to the high energy content in the primary smelting process. Of all the other metals outside of the CCCP, we could see the greatest likelihood of corrections to the aluminum price if the speculative energy premium the metal has enjoyed of late is removed.

Goldman Sachs has many detractors and critics in the market, although notably not among its investors, who tend to do well by its advice. Love them or hate them, you have to admit in the pursuit of profit they are second to none, and whether their advice to clients proves correct because of prescience or simply because it becomes self-fulfilling is of less importance than buyers taking note of the advice.