Home | Commodities | The International Trade Forecast for 2011 – Part One

The International Trade Forecast for 2011 – Part One 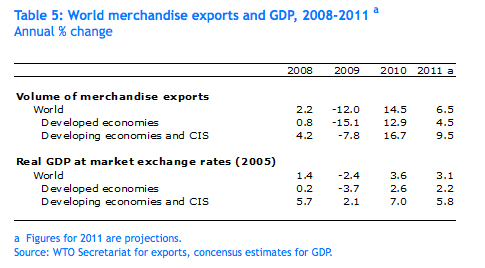 Overall, global trade volume is up more than ever before (14.5 percent in 2010), yet World Trade Organization and other economists are warning that the rise will not be duplicated and that growth will be more modest in the year to come, as seen in the graph above. The WTO published a report that gives us a look back at the 2010 trade picture, while looking forward to what the world can expect in 2011.

From Pascal Lamy, the WTO’s director-general: “The hangover from the financial crisis is still with us. High unemployment in developed economies and sharp belt-tightening in Europe will keep fuelling protectionist pressures. WTO Members must continue to be vigilant and resist these pressures and to work toward opening markets rather than closing them.

The whipsaw effect seen in 2009-10 will be evened out over 2011, due to a number of factors in the short term, according to the report. Not considering the Japan disaster and ensuing disruptions in the trade picture, a number of issues will hamper unrestricted growth, including: rising prices of food and other primary products, including base metals; the unrest in oil-producing countries in the Middle East; and how big a role new and existing subsidies and tariffs play in keeping trade “free.

In fact, the finite quantity of commodities such as oil, food, etc. and their allocation will be more indicative of trade activity and price movements than any natural disaster.   For example, the WTO report pinpoints a study that speaks to the elusive nature of data on how natural disasters affect trade and long-term GDP (and indeed, to how rare such studies are as well):

“A recent paper by Gassebner, Keck and Teh (2010) examines data on disasters in 170 countries between 1962 and 2004. Using the methodology of this paper, we find that the expected impact of the Japanese earthquake is to:

Indeed, those numbers indicate the growing economic power of Latin America, especially its larger role as a US trade partner; but will new FTAs be a good thing for the American economy? What role does metal trade play in all this?

PREVIOUS POST:
Is There An Alternative To Nuclear For Asia? – Part One
NEXT POST:
Goldman Sachs Calls the Top on Several Commodities