Keeping trade free and fair, as WTO Director-General Lamy would have it, is one thing to demand, and another to execute and to practice. (Otherwise, well, there wouldn’t be a need for the WTO.)

For example, as President Obama moves forward with the US-Colombia free trade agreement, upping US exports to the country by $1.1 billion per year from $12 billion in 2010, there are two sides to that story. The official line is that increasing exports will help boost more US jobs, while others call attention to the fact that the Colombia (and Panama and Korea) trade agreements will do nothing more than inflate the US trade deficit and actually kill US jobs in the long run to the tune of 215,000 by 2015, according to the Economic Policy Institute.

No matter where one stands politically on the NAFTA-style FTA agreements with Latin America and Korea, economically, US exports may continue to appear more attractive due to exchange rate activity. The WTO reported that by February 2011, nominal appreciation of the Yuan to the dollar was up nearly 4 percent, and real appreciation was up 1.3 percent in 2010 against a basket of other currencies, while the dollar’s real depreciation clocked in at 5 percent. If the trend continues, the US may be able to gain ground on China in the trade arena.

But these are still small-bore effects that aren’t able to change the global game enough to fully revitalize the US manufacturing sector. True, the metals category specifically has shone over the past decade: between 2000 and 2010, average annual price of metals increased 12 percent — faster than any other primary commodity group, the WTO cited. After a 20 percent annual drop in 2009, prices in the primary metals sector enjoyed a 48 percent increase in 2010, evident in the graph below:

However, iron and steel exports had not managed to reach 2008 levels last year: 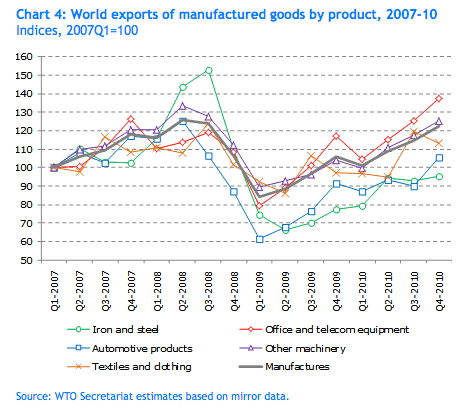 To keep the US steel industry competitive with emerging economies, especially China, the Economic Policy Institute’s International Economist Robert E. Scott testified before Congress late last month that US multinational corporations’ behavior in China (specifically as it pertains to levels and types of foreign direct investment) must be re-evaluated. He gives several suggestions in his testimony about how US policy can more effectively combat unfair trading practices employed by China, including Congressional action on trade law and the creation of new committees that investigate trade complaints, FDI inquiries, etc. etc. (Read the report here.)

The problem with most of these suggestions? We seem to have heard all of them before. And we suspect that potentially beneficial and more “out-of-the-box solutions exist outside of this realm. A set of solutions may come from exploring and understanding the definition of comparative advantage which we’ll delve into in an upcoming post.