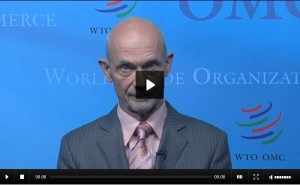 Source: WTO “Made In The World”

In considering the international trade picture for the year (and decade) to come, it is important to note the discussions on how exactly we agree to measure trade. Trade in value added has become a keystone concept in how global supply chains work and what effect they have for producers and consumers worldwide. Certain trade data and statistical analysis that is in use today by organizations such as the World Trade Organization (WTO) and the UN may not be telling the best story, to put it simply. As Pascal Lamy, the WTO’s director-general, puts it in the video above, “We want to know the value added by each country in the production process of final goods…in a nutshell, adapting trade data to today’s trade. In the end, improved measurement and better knowledge of actual trade flows will help better understand the interim dependencies of today’s national economies, support the design of better employment policies and better trade regulation worldwide.”

The WTO’s approach to this issue has been codified in their “Made in the World initiative, which sets out to correct the “statistical bias caused by the global supply chain when “full commercial value of a product or service is attributed to the last country of origin; essentially, the challenge is to correctly count trade in value added to be able to better understand where trade imbalances are truly coming from and how to solve them.

The WTO launched the initiative several months ago, but is beginning a new push to highlight these imbalances as the ambiguity of blame in anti-dumping cases, for example, is clouding the trade picture. In an effort to draw more attention to the issue, “Made in the World is opening up an online debate by allowing contributors to submit short articles on the topic as feedback.

Andreas Maurer, chief of the WTO International Trade Statistics Section, put his two cents into the debate on April 14. He spoke to the ambiguity of trade stats, which he called “blurriness, and used the iPhone as an example. Only a small portion of US trade shortfall regarding iPhones is due to value add from China, Maurer wrote seen in the graph below:

“Trade in value added however does not only challenge statistical concepts, it also addresses trade policy issues, Maurer goes on. “Who produces for whom or who should be protected against whom is often judged using trade figures recorded gross. Analysing trade in value added terms offers a complementary view as it may shed a different light on trade disputes and anti-dumping measures.

For all you metal producers, distributors and buyers out there check out their online forum page and submit your thoughts on how the “value-add discussion may affect your metals-related business from a global standpoint.