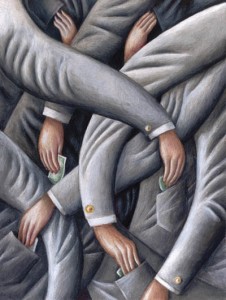 The US budget battle over spending hit its peak recently when the tussling in Congress between Harry Reid’s Democrats and John Boehner’s Republicans threatened a government shutdown. While political maneuvering avoided an imminent shutdown while solving hardly anything for the long-term the biggest issue facing Congress and President Obama (and by extension the rest of our country, our businesses and our citizens) is how to grow the economy, lower unemployment and increase personal prosperity, all while slashing the massive budget deficit.

Robert Skidelsky and Felix Martin, writing for the New York Review of Books, propose a bold solution as a way to tackle these problems. The rather self-explanatory title “For a National Investment Bank tells the reader in a nutshell what the authors’ solution is, and which position they are taking on it. While they spell out their argument in rather artful terms, with the “why of creating a National Investment Bank made clear, the “how and “how much leaves quite a bit to be desired.

Granted, the two authors have considerable financial and academic pedigree. (Skidelsky, apparently enthralled with Keynes, is a professor emeritus of political economy at the University of Warwick in the UK and has served as a director of Janus Capital and Rusnano Capital; while Martin, a senior investment analyst at Thames River Capital, has worked with the World Bank.) But their language circumvents how a National Investment Bank would work in the US, or how much it would cost in time, resources and staffing.

Their main argument: “A National Investment Bank could achieve two goals simultaneously: it could improve the long-term prospects of the US economy for growth by improving its facilities for energy, transportation, water supply, and much else, while offsetting the contractionary effects of orthodox fiscal policy.

They go on to outline the national policy objectives that the bank would primarily fund, including promoting exports, fixing up our roads/bridges/etc., and efficiently reducing our greenhouse gas emissions. A bank that would lend to parties invested in future infrastructure repair and construction, and to manufacturers looking to boost exports could be a great thing but it can only be determined as good if government spending to bring this bureaucratic institution to life doesn’t outweigh the value of investment that such an institution would be able to foster. For example, would the executives, directors and employees of the bank come from existing government offices, or would there be an entirely new team? How much additional spending, year-to-year, would Congress need to secure for this to work?

The authors go on to cite Ëœprofitable’ models like this that have worked in the past mainly those in Europe, such as the European Investment Bank (EIB). But they admit that much of the assets would come from private banks, in addition to whatever Congress can appropriate. What makes them think that private banks will want to willingly part with their cash for a national cause? And why would we need another government clearinghouse for monies that could be misallocated or misspent? Most importantly, if we expect the government to cut into its budget deficit in any meaningful way over the next couple decades, how will we get there if we’re spending more for another level of bureaucracy?

The authors’ biggest oversight is the cost involved, not just in creating the bank but running it. As mentioned in this post on the Naked Capitalism blog, it gets expensive and unruly to run very large banks, with a “negative cost curves and other pitfalls often surfacing. Also, just because the National Investment Bank would be a huge entity, who’s to say it couldn’t also fail or get to the brink of failing as so many of the biggies had in 2008-09? If too many NIB assets were to, somehow, become toxic, the extent to which the US government would be on the hook for a bailout is certainly something to consider.

But tell us what you thing would a National Investment Bank be good for the heavy metals and machining industries, based on the goal of improving exports and repairing domestic infrastructure? Would it be better/easier to receive funding or loans from an NIB than from private banks? Leave a comment!