Although the residential housing sector may not the most representative of industrial metal demand and overall economic health (residential construction accounts for about 2.4 percent of gross domestic product, according to Reuters, not likely to singlehandedly lift the US economy out of recession), construction in general does account for a significant amount of metal buys, such as steel. As a category, construction, for example, represented 42 percent of US steel shipments.

Therefore metal buyers would do well to keep a close eye on a major economic indicator to see where the commercial and industrial construction markets are headed, that would be the Architectural Billings Index (ABI). The recently released ABI figure for March was 50.5, down from 50.6 in February.

Put out by the American Institute of Architects (AIA) Economics and Research Group, the ABI provides insight nine to twelve months into the future of what nonresidential construction spending will look like. The monthly results, seasonally adjusted, derive from sending participating firms a survey that asks whether their billings increased, decreased, or stayed the same in the month that just ended as compared to the prior month. The nine- to twelve-month lag time between architecture billings and construction spending therefore provides an unparalleled indication to how commercial, industrial and other sectors’ construction will behave.

Scores center around 50 higher than 50 means an aggregate increase in billings, while lower than 50 means a decline. The numbers indicated good news for the Midwest commercial/industrial sector; the Midwest region stood at 53.5, while the commercial/industrial sector locked in a reading of 54.7, higher than multi-family residential, mixed practice or institutional. Project inquiries also appeared to be enjoying an upswing, with a 58.7 reading. 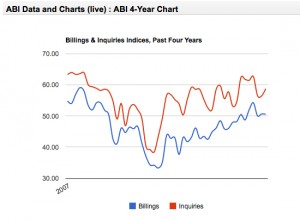 Overall, however, the results paint a picture of a lackluster construction sector. “Currently, architecture firms are essentially caught swimming upstream in a situation where demand is not falling back into the negative territory, but also not exhibiting the same pace of increases seen at the end of 2010, said Kermit Baker, the AIA’s Chief Economist, in the April 20 press release. “The range of conditions reported continues to span a very wide spectrum with some firms reporting an improving business environment and even ramping up staffing, while others continue to operate in survival mode. The catalyst for a more robust recovery is likely financing, with stronger growth occurring only when lending institutions begin approving credit for construction projects with much greater regularity.

This stagnation reflects an earlier forecast by economists at the AIA, which called for an increased nonresidential construction recovery in 2011, but not until the end of the year, which ultimately will keep the overall growth from surpassing 2010 levels and “setting the stage for 2012. Baker wrote that the AIA expects overall building construction to rise 5 percent in 2012, but up to 10 percent for the commercial sector.

We have to keep an eye on interest rates, banks’ lending activity, (namely the loosening of restrictions) and energy costs, as well as corollary markets for example, the supply chain issues hitting auto and technology markets post-Japan disaster in addition to construction to really get a feel for where steel, aluminum and copper prices will go. Steel factors heavily into automotive and construction sectors, as does aluminum. Even if the US construction market can’t hold up its end on the recovery front, there is no reason not to think demand in China, India, Turkey and other emerging markets should make room for US exports and buoy industrial metals’ record prices even more.