Glencore IPO – Does the mining and commodities world need “glamour and mystique?

All eyes are on Glencore, the metals and commodities trader based in Switzerland, as it prepares its record-breaking IPO. Will this be a good thing or a bad thing for the markets? Depends. It certainly won’t hurt the leaders of the firm payouts for the company’s 485 partners could average $100 million. The most interesting development in time to come may be an outright merger with Xstrata, in which Glencore owns a 34.5 percent stake already; merger talks have for quite a while. Ultimately, Glencore’s IPO may reflect their feeling that the commodity bubble is truly about to pop.

Inflation across the globe

Brazil recently raised its interest rates a quarter of a percentage point, up to 12%, according to the Wall Street Journal. This comes as the entire world reacts to rising food, oil and other commodity prices. China also raised interest rates another quarter percent in its ongoing inflation battle, the fourth hike in five months, according to the FT. With rising inflation rates from Hong Kong to the EU, global rate tightening is another issue to watch as commodities continue getting pricier.

Finally, a global barley shortage could be in the cards if this continuesÂ¦

The Graph of Last Week Award goes to Felix Salmon of Reuters (and Spend Matters’ own Sheena Moore) for posting (and re-posting, respectively) the following comparison of China’s thirst for beer compared with the rest of the world: 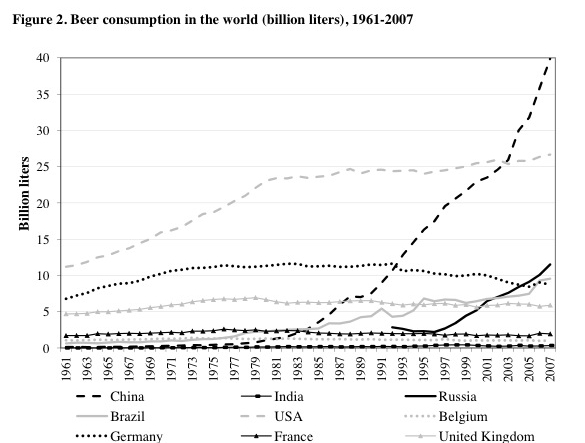 Although China is starting to foster a vibrant wine-appreciation scene, the truth is probably closer to this comment by “johnband: “they will put the Two Buck Chuck stuff in $45,000 Chateau Lafite bottles to get passed around as gifts. Check out Jason’s posts over at Spend Matters on this topicÂ¦