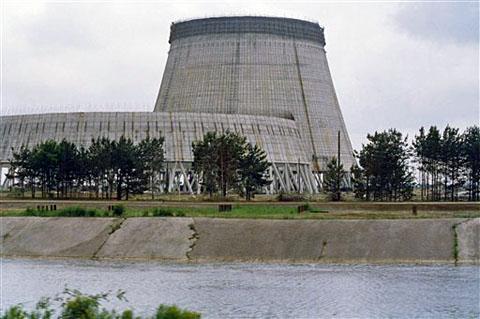 The world observes the 25th anniversary of the Chernobyl disaster (April 26th, 1986) tomorrow, the worst nuclear accident in history. The Fukushima debacle in Japan following the earthquake and tsunami last month has thrust Chernobyl back into the spotlight, for better or worse, as a comparative example for scientists, politicians and journalists alike. Now that the benefits and drawbacks of nuclear power are under the microscope once again, the home of the now-defunct Chernobyl plant Ukraine and its government is taking a leading role in the nuclear discussion. (Of course, Soviet authorities ran the Chernobyl power station, as Ukraine remained under the thumb of the Soviet Union until 1991, when it gained independence.)

According to Worldwide News Ukraine, the country’s president, Victor Yanukovich, and scores of delegates from the EU and other G8 countries gathered for the Kyiv Summit in the capital city to agree that nuclear power and safety is a global challenge that must be tackled together. Ukraine, a member of the Convention of Nuclear Safety, called on other nations relying on nuclear power to join it as a show of solidarity. Ukraine, the EU and the International Atomic Energy Agency (IAEA) have been working together for years to bring the country’s nuclear safety measures up to speed with international regulations.

President Yanukovich, speaking at the 2010 US nuclear security summit, also announced that Ukraine has disposed of 106 kilos of weapons-grade uranium, and plans to get rid of most to all of it by April 2012, ahead of a summit in Seoul, Korea, the report also stated.

Ukraine is the world’s 8th largest producer of iron ore and steel, and also produces significant amounts of manganese, manganese ore, manganese ferroalloys and aluminum. Although Ukraine gets most of its nuclear fuel from Russia, according to the World Nuclear Association, the country has “modest recoverable resources of uranium –200,000 tU according to IAEA Red Book 2007 and 131,000 tU according to the Energy Ministry.  The WNA also says Ukraine “expects to be producing 1000 tU/yr in 2011 and hopes to fully satisfy its domestic demand of up to 1880 tU/yr by 2015.  Four power plants are in current operation in Ukraine, with its Zaporizhia plant producing 5718 MW of energy, making it the largest nuclear plant in Europe. Nuclear power represented the majority of the country’s electricity generation since 2007 (see below): 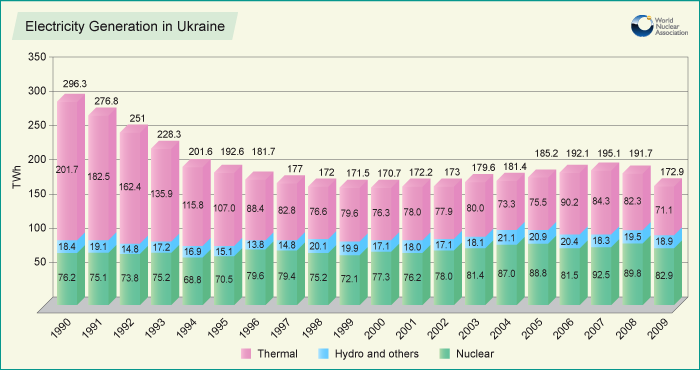 Many of Ukraine’s public statements of late, including international summit talk and agreement, have functioned as a direct show of support for Japan and the destroyed Fukushima power plant. As a country that’s been there before, it appears to be at the forefront of nuclear safety and the political mobilization to achieve it. Now, if only they could get rampant government corruption, unemployment and parliamentary and cultural discord under controlÂ¦