Home | Environment | OTEC's Zero-Carbon Emissions Too Good to Be True? Maybe not.

OTEC's Zero-Carbon Emissions Too Good to Be True? Maybe not.

In response to a recent article of ours entitled “Is there an Alternative to Nuclear for Asia,” a reader left a comment regarding a technology that appears to have been on the cusp of commercial realization for nearly two decades, but has been largely ignored in preference to simpler wind and solar technologies. We’re talking about Ocean Thermal Energy Conversion (OTEC), and we rather liked the idea for a number of reasons. First and foremost, large-scale rollout would involve substantial opportunities for metals in the same way offshore oil and gas exploration have done for nickel- and chrome-based stainless and super alloys. Compared to electricity-generating technologies like wind and solar that are subject to the weather and day/night cycles, OTEC would operate 24 hours a day, seven days a week, 365 days a year with the only likely interruption being due to hurricanes when, like oil rigs, operations can be temporarily shut down. One of the greatest attractions is the economic case made not just on power generation but a host of other potential quantifiable benefits like desalinated water, aquaculture and, depending on the plant location, even air-conditioning for shore-based installations. OK, enough of the hype — how does it work?

Broadly, the technology takes advantage of the temperature difference between warm tropical waters at the surface and cold waters at depth to drive a turbine and generate electricity. In waters between the Tropics of Capricorn and Cancer there are multiple sites around the world where surface temperatures are up to 24-28 degrees Celsius and the sea bed drops down to up to 4,000 feet with temperatures down to 5-6 degrees C. 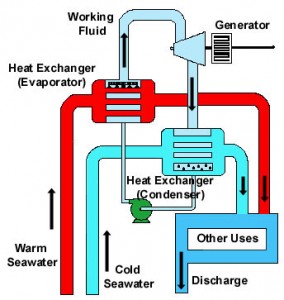 The above diagram from www.our-energy.com illustrates the comparatively simple process called the Rankine Cycle – the basic principals have been known for a hundred years or more. Water condensed after the turbine stage can be collected as desalinated water, a resource often in short supply in tropical regions. In addition to electricity and clean water, there is the potential for a proportion of the nutrient-rich cool waters to be diverted to shore-based pools if plants are built on land or close to land. These waters can be used for farming salmon, abalone, oysters, clams and lobster, premium products that can generate additional revenues if carried out on a commercial scale.

Undoubtedly, for OTEC to be viable as a power source (as Wikipedia points out), the technology must have tax and subsidy treatment similar to competing energy sources. Because OTEC systems have not yet been widely deployed, cost estimates are uncertain. One study estimates power generation costs as low as US $0.07 per kilowatt-hour, compared with $0.05 – $0.07 for subsidized wind systems, so for power costs it’s in touch. If other benefits such as desalinated water can be brought into play the viability may be improved further. In one study by a leading technology developer, Sea Solar Power, the fresh water alone could be worth up to two-thirds of the value of the electricity. Lockheed Martin has been running a pilot project in Hawaii that should be generating 10 MW by 2012/3 and all being well, a 100 MW site by 2015. Hawaii was spending $8 billion/year on imported fossil fuels in 2009 (more now with current prices), all of which could be replaced by OTEC with zero carbon emissions.

Major hurdles still need to be overcome, one of which is the cost and design of the deep water pipe used to bring cold water to the surface. One suggestion is to pump the refrigerant down to the depths and then bring it back up chilled. But that would lose the benefit of using nutrient-rich deep water for aquaculture; however, for plants sited further out to sea that opportunity is greatly diminished anyway. It may be that it takes Lockheed Martin’s largely government-funded research project to prove the technology, yet for the last 40 years Sea Solar’s founders have been researching and developing the technology largely off their own backs. (How often has the original inventor not been the one to capitalize on the development of a new technology?) Nevertheless as Lockheed’s video introduces, the world’s oceans absorb the equivalent of 250 billion barrels of oil-equivalent solar energy every day; if less than 0.1 percent of this could be harnessed via OTEC, it would be the equivalent of 20 times the electricity consumed in the US with virtually zero carbon emitted, no unsightly windmills in your backyard or desert tortoises inconvenienced. A prize worth spending some federal dollars on if ever there was one!