US-Canada Trade at the Center of New Bridge Debate 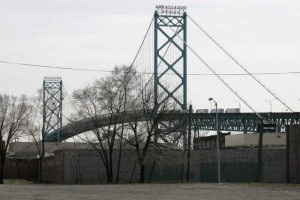 The “Great Second Bridge Debate, as I’ve come to call it, has come to a head lately as Detroit’s Ambassador Bridge owner Matty Moroun dukes it out with the US and Canadian governments, Michigan’s governor Rick Snyder, GM, Chrysler, and countless other businesses over the proposal to build a second international bridge downriver from the Ambassador, connecting Detroit, Michigan, with Windsor, Ontario. The project is called the “New International Trade Crossing.

The rub is essentially this, based on years of reporting by the Detroit newspapers: Moroun, an old-school mogul, is the private owner of the Ambassador Bridge, and he doesn’t want another bridge, to be co-owned and jointly operated by the US and Canadian governments, to cut into his profits. (This charade has been going on for five years.) The argument against Moroun’s, taken up by the governments and businesses on both sides of the border, stems from this major fact: The Ambassador Bridge, the above-ground sibling of the Detroit-Windsor Tunnel, together comprise the single largest US-Canada trade crossing by volume on the continent, with $500 million in goods making the crossing daily, according to comments made by Bill Ford, Ford Motor Co.’s executive chairman. Canada is the US’ largest trading partner, with some $1.5 billion in goods and 300,000 people crossing the border every day according to the US Commerce Department.

The Detroit Free Press published an excellent series of reports on the issue, trying to dispel myths by breaking down the costs and benefits to businesses and taxpayers. According to the newspaper’s reporting, Moroun does want to build a twin bridge next to the Ambassador at a personal cost of $500 million, but the Canadian government supports a bridge farther downriver that would connect trucks to the 401 expressway instead of Huron Church Road in downtown Windsor. The Free Press estimates the cost of a joint US-Canada endeavor at $950 million, to be paid mostly by issuing and repaying bonds and not directly taxing citizens. Michigan’s Gov. Rick Snyder and state legislators drafted a bill that would protect taxpayers from liability.

Big Auto supports the New International Trade Crossing nearly across the board, with Ford, GM, Chrysler, Toyota and Honda all backing the project. According to the NITC’s blog, “half of all daily trade between the United States and Canada travels through the Ontario-Michigan border and nearly 60 percent of all Michigan exports go to or through Canada. (Looking at recent US Census numbers, however, US auto companies and others must find ways to increase their exports; the US is running a trade deficit of nearly $6.7 billion dollars with Canada so far in 2011.)

The best thing the project would do aside from the trade angle is creating construction jobs even though temporary and stimulating the business of local/international contractors who will be supplying the metal and manpower for the bridge. The NITC blog cites an estimated 10,000 jobs for Michigan workers from initial construction and support for an additional 25,000 Michigan jobs once construction is completed. MetalMiner will continue reporting on that angle as the discussion and approval process continues.

PREVIOUS POST:
ClimbTech's Stainless Steel Anchors: From Mountaineering to Mining
NEXT POST:
Toyota's Troubles (And Nissan's, And Honda's) To Cut Into Platinum's Rise?