Home | Commodities | Zinc: So Strong, But For How Long?
Market Analysis

Zinc: So Strong, But For How Long?

Reading the runes for the zinc market has become quite a challenging exercise. The price has been one of the success stories (if you are a producer) of the global recovery, rising steadily along with copper, with which it has been showing a strong correlation. Like copper, part of the story is the probability of dwindling supply towards the middle of the decade as major mines such as Perseverence (with about 130 kt of production), Brunswick (with about 200 kt), Lisheen (with 170 kt) and Century (with about 500 kt) close down from 2012 to 2014, taking 1 million tons of supply out of the market that is currently in deficit to only about 340 kt this year, according to HSBC.

On the flip side, the cost of production at about US $1500 per ton is way below the current market price, today at over US $2300 per ton, so every mine with potential to expand is seeing investment and many smaller projects are being rushed into production even if projects the size of Century are not in evidence.

Demand is forecast to rise by about 5.5 percent this year according to the bank, while supply is set to rise by about 2.2 percent; yet even so, the market is in surplus and inventory levels have continued to rise. 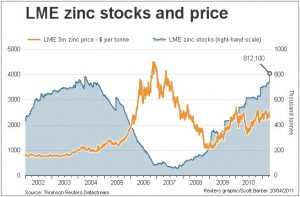 Stockpiles of zinc held in LME warehouses surged past the 800,000-ton mark for the first time since 1995, climbing by 26,550 tons to 812,100 tons, this month. Zinc is the only other metal with aluminum that can benefit from stock and finance games due to its strong forward curve. 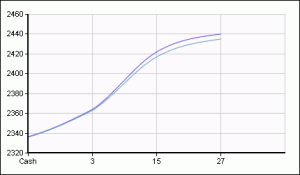 Traders and banks can buy spot metal and sell forward at a premium, yielding a small premium to cover finance and storage costs. The premium is not as good as aluminum, but could be contributing to growing stock levels.

Of more concern than the rise in LME inventories is the rise in Chinese stocks. As Beijing attempts to curb property speculation, construction activity has cooled and market demand has softened. Construction accounts for half of all demand for galvanized steel and galvanized steel accounts for 56 percent of all zinc demand, so although machinery and automotive are doing OK, the combination of slowing Chinese construction demand and near-stagnant western world demand is contributing to growing stocks. According to Reuters, China, the world’s top producer and consumer of the metal, may be holding 1.3 million to 1.5 million tons of refined zinc in private and public warehouses (including SHFE and bonded warehouses) — about three times its production in March. Normally, April to June are peak restocking months for consumers, but demand ramp-up in the first quarter has been weaker than last year.

Rising stocks, softening demand and continued strong production, at least in the short term, suggest prices are set to ease further this year, but the closure of major mines from 2012 onwards coupled with an expected recovery in the western housing market suggests the market could be better balanced from 2012/13 into the future. In the meantime, there is not much to support current prices and we would not be surprised to see them continue to drift lower. Like copper, the long-term fundamentals are sound, but like copper, recent zinc price rises are proving too much too soon and a reduction to saner levels is in the cards.