The aluminum price has remained strong this year, even as the price of other metals such as copper have fallen. The steady if unspectacular rise in the price may lead one to believe the fundamentals for the metal are sound. In fact, nothing could be further from the truth, and the next two years could be a particularly volatile period for a number of reasons.

Global production has been rising strongly. HSBC estimates output will rise 8 percent this year, mainly driven by China at 10.8 percent and the Middle East at 24.6 percent. Chinese domestic output has returned to near record levels of 17 million tons per year in February this year, as smelters ( idled in the 4th quarter due to power constraints) have been brought back on stream; even so, capacity is still only running at about 80 percent and with the cost of production well under the market price, the main constraint holding idled capacity from coming back on stream is power supply. A combination of high coal prices and low water levels are severely hindering generators from producing as much electricity as the power-hungry economy requires. According to a Reuters article, China has warned that power shortages this summer could be the worst for years, with power generation and transmission systems unable to cope with the train crash of rising demand meeting coal shortages and low water levels. 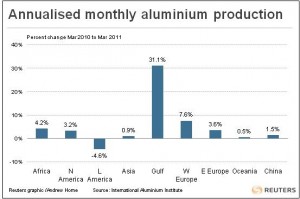 Meanwhile in the rest of the world, output has been rising, as this graph from Reuters shows, particularly in the Middle East where output in March 2011 was running over 30 percent higher than in March last year. That’s down to the simultaneous commissioning of two new smelters, the 585,000-ton per year Qatalum plant in Qatar and the 700,000-ton per year EMAL plant in Abu Dhabi.

Global aluminum demand appears to be steadily returning, forecast to rise by 9.0 percent in 2011 on top of 12.6 percent last year, according to HSBC. Events in Japan will dent demand there this year, but stimulate demand next year as reconstruction gathers pace.

There are risks to these numbers both on the upside and the down, and in large part the swingo-meter is driven by China.