Chinese domestic production capacity dwarfs any other region of the world, and it is also some of the highest cost — but not across the board. Some smelters rely on the national grid for power deals, others have captive power plants. All of them are influenced by Beijing’s policies on power consumption and on the underlying cost of coal, the fuel source for 80 percent of electricity production in China. Given a free reign and sufficient power supply, smelters would continue to construct new plants and run as close to capacity as they could, but Beijing appears to be finally getting to grips with the smelter building program. National capacity is already significantly higher than actual production and is projected to rise fast to 30 million tons by 2015, from a current 23 million tons unless new capacity is halted, according to the Reuters article. 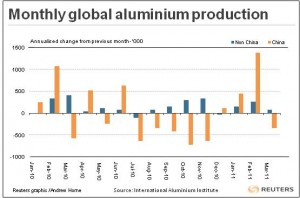 Production soared in the first two months of this year from below an annualized 15 million tons per year to 17 million as power was turned back on.

The country has been largely a closed market for aluminum. Imports have been modest, according to a Reuters article, at just under 70,000 tons in Q1 compared to the same time a year before. But exports have been rising, as the graph below from Reuters shows, suggesting there is no shortage of capacity in the supply chain and domestic demand is not sufficient to keep domestic processors busy. 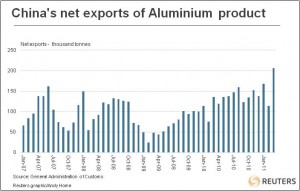 In spite of rules on export taxes intended to limit large-scale exports of semi-finished metals, volumes have surged. These are not yet a problem for western producers, but if the trend continues, Chinese material may begin to undermine western aluminum semis market price levels, even though quality concerns are widespread.

If Alcoa and other western primary mills were to embark on a systematic program of smelter closures like China, such that the country became a net importer again, the ingot price could return to levels last seen in 2007 of over $3000 per ton. While it is a possibility, it is unlikely. Too much money has been sunk into too many smelters for wholesale closure of large swathes of the industry. On the downside, a flattening of the forward price curve could see new finance deals fail to roll over later this year and next, releasing part of the huge stocks held by banks and hedge funds, both in China but more ominously in western markets.

Unlike copper or zinc, where mine supply-side limitations loom later in the decade, aluminum is at risk more from excess refining (smelting) capacity on the one hand and rising electricity costs on the other, with the continued viability of the forward finance deals an ever-present and underlying threat. Volatility will be the order of the day and HSBC’s forward price predictions should be taken as averages for the year with large margins on either side possible on the price. What that means for buyers is keep a close eye on the drivers outlined above and judge forward buys on a perception of where the price is relative to the longer-term trend.