It is often difficult to get the true story on how US manufacturing is actually doing these days. Leading indexes and economic indicators can tell us the general direction of the economy, but they generally don’t tell the whole story. For example, the Institute for Supply Management (ISM) reported today that national factory activity as measured by its manufacturing index declined for the second straight month, to 60.4 in April from 61.2 in March. But in terms of job creation and industrial education, two topics that we have covered extensively in the past, things appear to be looking up for the Midwest Rust Belt, at least.

The Financial Times reported that Michigan, arguably the state hardest hit by the recession, is enjoying somewhat of an upswing especially for its auto industry. According to the story, Ford Motor Co. reported its highest first-quarter earnings in 13 years. The company’s recent success is just one example of how the manufacturing sector may be taking the lead in turning the unemployment rate around. Michigan created 29,800 new net factory jobs in the past year, which accounts for 15 percent of net job creation in industry over that same time period. The graph below illustrates how the Rust Belt compares with the South (and the ailing Northeast) in terms of adding more employees to payrolls: 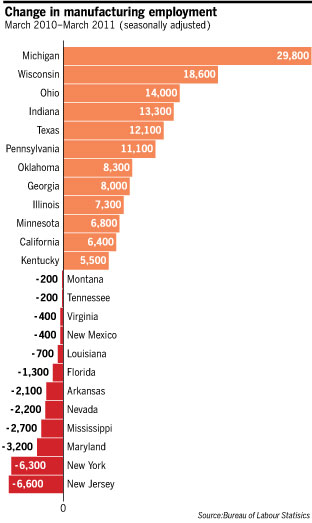 Production and labor costs are still higher in the US than in China, and generally higher in the northern states than in the US South due to unionization, but many say that access to a more highly educated workforce in the north, as well as a more established industrial infrastructure, offsets those costs, another FT article makes clear.

But according to several sources MetalMiner has spoken with in the Detroit and Chicago areas, technical schools, colleges and universities continue to experience historically low enrollments. Ray Prendergast, director of the Manufacturing Technology Institute at Richard J. Daley College in Chicago, has told me that enrollment had been significantly low, at around 40 students, last fall. The institute did set a goal of raising enrollment by 5 percent every year, and it’s up to 60 students this spring. Whether the trend will last depends on the scale of industrial demand.

However, can the US really compete with Chinese labor rates in either region? Not really. “While costs are often still higher in the north than in the south, the differences are not enormous, the FT article states. “An average general-purpose production worker, or “helper, on the US government’s definition, is paid $25,240 per year in Michigan and $23,090 in Mississippi, according to official figures: a difference of about 9 per cent.

Meanwhile, companies such as Caterpillar and American Axle & Manufacturing (AAM) are doing pretty brisk business due to the boom in commodities prices. The FT reported that Cat boasted quarterly earnings way above investors’ expectations in the first quarter, and continues to expand domestically by building plants in Texas and Arkansas. AAM, which makes driveline, drivetrain and chassis systems and other metal-formed products for cars and trucks, reported a 24 percent increase in total sales year-over-year in Q1, up to $645.6 million, according to the company’s press release. Its non-General Motors sales rose 44 percent year-over-year, to $178.4 million. “We continued to benefit from improved capacity utilization and sustained reductions in our fixed cost structure,” said Richard E. Dauch, AAM’s CEO, in the statement.

Overall, manufacturing performance is the strongest in the US economy it grew 9.1 percent (the estimated annual rate) in the first quarter, compared to 1.8 percent for the economy as a whole. Could this be a long-term trend, as China deals with inflation, increased environmental regulation and subsequent costs of production? Maybe. Even though Chinese workers are not paid nearly as much as their American counterparts, the standard of living is slowly creeping up and the middle class is growing. Within the next couple decades, US manufacturing could be seen as truly competitive globally once again, especially if costs to produce in China continue going up. Whether that’s happening already, though, even amidst a growing domestic manufacturing sector, is still a tough case to make.