Copper Prices Not Looking So Strong

Rising copper prices in the last few days may lead buyers to believe normal business has resumed for the copper bull run. The copper price had been rising strongly last year and this year reached over $10,000 per ton in February, but has since fallen back in what many copper bulls see as a well needed pause before the next drive higher. 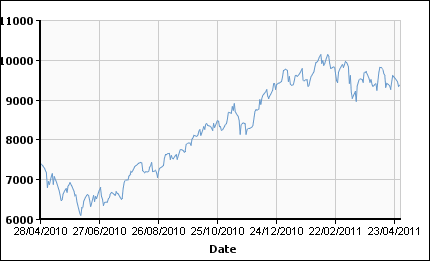 In a Reuters article, Barclays Capital analyst Gayle Berry is quoted as saying she expects copper prices to average $13,000 a ton in the final quarter of 2011 after a period of range trading between $9,000 and $10,000 in Q2 and Q3. Supply disruptions are cited as one reason. Japan’s copper output is expected to tumble as two out of three big smelters have suspended part of their operations since the earthquake. Late last month, Chile announced copper output had fallen 6.6 percent compared to a year earlier as disruptions by earthquakes last year impacted port facilities, and investments to counter falling ore grades are still a year or two away from boosting production.

But rising inventories, both on the LME and in China, point to a surplus of material, Steve Hardcastle of Sucden Financials told Reuters. The copper market was in deficit last year to the tune of 300,000-400,000 tons, but this year it could be in balance. HSBC, in a recent quarterly report, says the opposite: the refined market was in surplus last year of 91,000 tons, but will be in deficit this year of 78,000 tons. As the bank observes, copper demand remains woefully under-researched. Estimates of supply and demand are made up largely from major industry consultancies, which in turn are largely based on apparent, rather than measured, demand. What is clear is that copper buying by end users has slowed in China, the world’s largest consumer; as prices rose through $9000 to $10,000 consumers withdrew. Whether they will come back if prices fall, offering support to a further fall is uncertain. What is clear is that this combination of rising inventory levels and lower-than-anticipated Chinese demand coupled to a lack of SHFE-LME arbitrage is resulting in the relocation of metal from bonded warehouses in China into LME warehouses in the Asian region. As Standard Bank advises in a recent note to investors, metal bound for China also appears to have been diverted into LME warehouses amid lackluster nearby demand. Even with a dramatic rebound in Chinese demand for copper, the excess metal in the system will still take some time to be worked through. Assuming Chinese demand picks up, there remains an overhang of SHFE metal, running some 70 kt above the 5-year average, Chinese bonded warehouse stocks, some 200-300 kt above normal levels, and LME on-warrant inventories, which are some 220 kt above the 5-year average. If demand doesn’t pick up as expected in the normally stronger Q2 period, then stocks could rise further and inevitably put further pressure on prices.

The recent strength in prices mentioned in the first paragraph can largely be put down to weakness in the US dollar. As an example in sterling terms, copper at an average US $9550 per ton for April was the equivalent of £5970 per ton at the beginning of April, but due to the gradually weakening of the dollar, the same dollar copper price was equivalent to only £5,800 per ton today. That fall in copper prices has been mirrored in all currencies except the US dollar this month, and underlines that the China Effect is, for once, working against the copper price.

HSBC rightly observes Q2 will be a critical period for copper. The market is expected to tighten as it usually does, but the key test will be what effect a rise in demand has on inventory; if inventory levels are not seen to fall, then prices will do later in the year and into 2012. The bank is predicting average prices for this year of $8914 per ton and $7496 per ton for 2012, starkly opposed to Barclays’ prediction of $13,000 per ton by year end. The key dynamic to watch are these inventory levels as they will be the first indicator of underlying demand.