“The two polite Pakistanis who helped Osama bin Laden hide in the shadow of their country’s army bought big food orders, chose major brands and equally favored Pepsi and Coke, neighbors and a local shopkeeper said. This lead paragraph from Anwar Shakir’s piece in Bloomberg BusinessWeek gives away Osama bin Laden’s Western tastes, but doesn’t mention that the terrorist-in-chief also might have had a soft spot for what our lightest industrial metal continues to do for the beverage bottle-and-can world.

“Bin Laden’s men Ëœnever came by foot, they always drove a Pajero or a little Suzuki van, and they bought enough food for 10 people,’ said grocer Anjum Qaisar in an interview with the Bloomberg reporter. Although they likely needed the van primarily to transport heavy cargo such as Edy’s Ice Cream and Idaho potatoes to feed Osama bin Laden’s cravings (we can only assume), they could practically have skipped down the street with cases of Coke because the aluminum bottles and cans are the lightest beverage containers on the market.

Strength, recyclability and sleekness are making aluminum bottles all the rage lately. Coke began test-marketing aluminum bottles in early 2008, based on the shape of their old-school glass bottles. The aluminum iterations are sold all over the US and Europe, and penetrating other markets as well (Pakistan, perhaps?). But at least bin Laden wasn’t caught with the way-too-chic Karl Lagerfeld designs for the Coke Light bottle that the designer recently unveiled for sale in Europe. 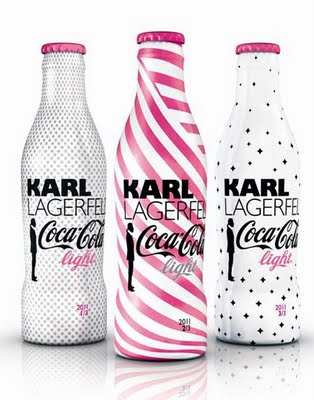 Even more savvy is the Rexam FUSION aluminum bottle, used for energy drinks, fruit elixirs and even wine in Germany, France and elsewhere in Europe. It was first released in 2007, but just recently won the Best Packaging award for  the OCÃƒO Beauty Drink at this year’s Beverage Innovation Functional Drinks Awards in Washington, DC: 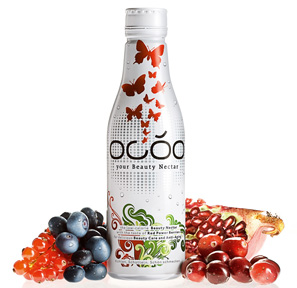 Made using what the company calls “drawn wall ironed technology (which, as far as we can tell, improves strength without sacrificing additional weight), the FUSION bottles weigh 10 percent as much as their glass counterparts.

All kidding aside, these trends serve not only to increase and diversify aluminum usage, but to up the metal’s “green profile and “carbon-friendliness; in an industry known to use great amounts of power in production, namely smelting, the beverage container segment leads the push to reduce waste and energy on the back end. Of the 280 billion beverage cans manufactured globally, 85 percent are made of aluminum. Aluminum beverage containers are more sustainable than ever, as reported by the Aluminum Association last year (the most recent data available), thanks mainly to their high recyclability rates. Other findings included a 44 percent reduction in the aluminum can’s overall carbon footprint; 30 percent less energy usage; and a 15 percent package weight reduction (you’re welcome, bin Laden’s gofers).

Pat Persico, manager of corporate communications for Novelis (which uses a different technology also called Fusion involving bringing new alloys together in dual-walled aluminum sheet) and chair of the Aluminum Association’s Can Committee noted in the report that the aluminum industry is committed to a goal to increase the recycling rate to 75 percent by 2015, up from its 2010 rate of 54.2 percent. “Recycled aluminum uses 95 percent less energy and creates 95 percent less green house gas emissions than new aluminum, Persico said in the report.

Therefore, we can only surmise that Osama bin Laden and his housemates enjoyed their final beverages from super-light, highly recyclable and relatively stylish aluminum cans or bottles. Hope they tasted good.