China may be the world’s largest producer of coal for power generation, but as the world’s largest consumer, the proportion that it imports is still arguably the single biggest driver of global prices. China often faces power shortages in the middle of winter and middle of summer, respectfully, when heating and cooling demands are at their highest; but this year, power shortages have started two months early and look to be the worse yet, according to a recent Reuters article.

The blame falls largely on the shoulders of Beijing. For years, they have controlled the price at which generators can sell electricity in the market, which worked relatively well when domestic demand could be met by domestic coal supply at a reasonable price, but the cost of coal production has risen, in part because coal mines and coal consumption are geographically some way apart. Imports can make up the difference, and are largely met by Australia and Indonesia. But as imports have risen, this demand has impacted the global coal market, driving up the price such that generators are caught between a capped sales market for power and a rising raw material cost based on global coal prices. Imports have been strong for much of 2009-2010 as this graph from HSBC shows, but the tide could be turning this year: 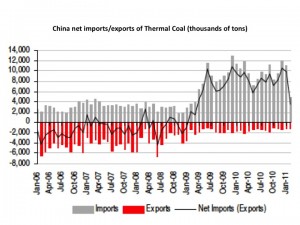 Chinese power generators usually have the option of buying domestically or to import, but domestic prices have been rising fast and even though in January-February of this year coal production rose 12 percent year on year to 516 million tons, imports only dipped slightly, as this graph from HSBC shows: 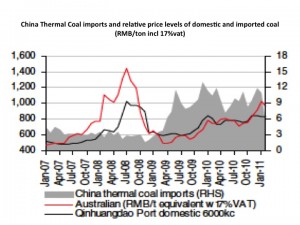 The worst flooding in 50 years in Australia’s Queensland meant coal supplies were tight and prices started the year at the highest since mid-2008 peaks. Chinese coal prices were back to a discount to world prices in February, encouraging buyers to switch to domestic low-grade material, a trend that is likely to continue this year in the bank’s opinion.

While coal supply may not be a problem, prices are, and both domestic and imported prices are higher resulting in power producers losing money. According to Reuters, some privately owned small to medium utilities have already shut down and for larger plants still in business, buyers are switching between domestic and imports to save even a few cents. Power shortages are therefore expected to get worse this summer and metals production is likely to suffer. While larger producers are often shielded by local governments keen to maintain employment and local output, small to medium-sized steel, aluminum, zinc, lead and cement plants will likely not be so fortunate and closures may result. Whether the gradual cooling of the economy coincides with this loss of production, and the extent to which large domestic stocks of non-ferrous metals meet medium-term demand is probably not so much of an issue as is the support this will give to global metals prices. There doesn’t need to be a limitation of metal supply to support prices, merely the expectation that there could be a supply shortage.

Although Beijing has raised power tariffs recently, it is not enough to stem generators’ losses; but with inflation a rising concern, the authorities are unlikely to raise tariffs again soon. For the time being, at least, no end is in sight for power generators’ pain.