Rising commodity prices are undoubtedly on everyone’s mind, from producers to distributors to buyers (not to mention investors), and even the latest major commodity selloffs in silver, gold, copper and oil are not quite enough to make anyone in the metals industry believe that commodity prices will stay down for long.

At a recent metal industry forum hosted by Grant Thornton and Winston & Strawn LLP in their Chicago office, executives from Ryerson, Inc., GE and others spoke about the current condition of “Today’s Metals Industry. (I can’t resist mentioning the deliciously cheesy subtitle: “Steeling Itself for 2011 and Testing Its Mettle for the Future.) While MetalMiner has already covered much of what they spoke about GDP numbers, auto demand, the OCTG market, wind power, and the China effect, for example — one seemingly under-reported issue that came up related to how inventories are playing into pricing now and in the future.

For context, the graphs below show the inventory levels of steel and aluminum for US service centers as surveyed by the Metal Service Center Institute (MSCI): 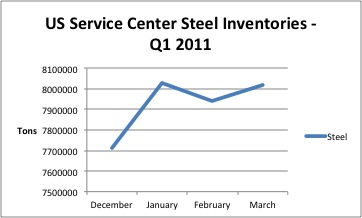 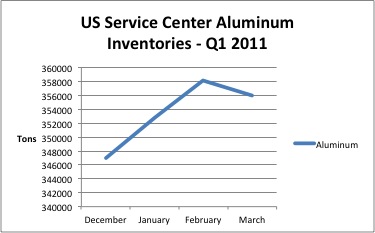 When posed with the question of how inventory levels have changed during the upturns and downturns at the Chicago metals forum, Brian Deck, vice president of finance and treasurer of Ryerson, recapped the past couple years of the industry. In 2008, demand was strong and supply was tight, but by the summer, things really got overheated, he said. MSCI data showed 2-3 months of inventory at the time, but service centers ended up holding 4-5 months worth of inventory, according to Deck. The economic value loss that middlemen took was huge, and the market took most of 2009 to rectify. 2010 inventories were replenished to a degree, but current levels are lower than they’ve historically been.

“Right now, OEMs are tight on inventory, service centers remain tight, and this bodes well for higher commodity prices, Deck said. He continued, “Service centers are living hand to mouth. The mom and pop [centers] will take positions, buy 6 months of inventory, but the big guys are not taking positions.

Greg Eck, senior vice president of metals and mining for GE Capital in the Americas, also weighed in by saying that historically, the ebb and flow of inventory had to do with imports from Turkey, Russia, and others, and purchasers were literally watching metals devalue as they were shipping. According to Eck, a GE-commissioned CFO survey showed that 80 percent have had a fundamental shift in inventory philosophy since the ’08 crash and ’09 recession.

Ultimately, what all this means is that there’s a lot of volatility in the market that is becoming harder and harder to offset. Lars Luedeman, a director at Grant Thornton, whose clients are mainly in the auto sector, warned not to lose sight of risk. If you have middle market companies with a broad range of products, he said, “you can’t eliminate that risk totally. Within two months, prices can move pretty quickly. If there is slowdown in China, it will quickly impact the markets here and have negative impact on inventory levels.

Recently, Steel Market Update wrote that for flat rolled steel, “the MSCI had U.S. service centers holding 1.9 months supply of flat rolled steel well below the 2.4-3.0 levels normally held at the service center level. According to the publication, this means that domestic mills believe the service centers are forced to buy steel “within a relatively short period of time. Much of this data points to the fact that inventories are a pretty important driver of prices. Import/export activity should play a key role as we get into the summer months.

PREVIOUS POST:
Glencore IPO: Good or Bad? And What Does It Mean?
NEXT POST:
Ocean Thermal Power: Why Hasn't It Come of Age? – Part One