LME metal prices have not fallen across the board in recent days, and while relative minor dollar strength has played its part, a much bigger factor is fear of slowing metals demand, both in China and from stuttering US and European markets a general risk of attitude from speculators is the order of the day. Some metals such as copper and silver have come off significantly; others have fallen more modestly such as aluminum, but the intriguing one is lead. 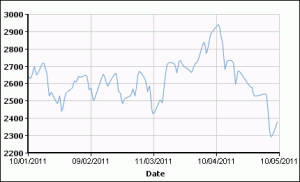 As this LME graph shows, the price was erratically fluctuating on either side of about US $2600 per ton during the first quarter before falling with the other metals for much of the last month.

As the price has fallen, successive LME announcements have revealed the identity of the dominant holder on the market. At the beginning of May, Glencore was identified as holding between 30 and 40 percent of stocks, which increased to 50-80 percent last week, according to LME data reported in a Reuters article. The suggestion is Glencore may be holding this for delivery to a client but it would have to be a pretty big client if that were the case. The value of 80 percent of LME lead stocks (some 240,000 tons) at current prices of $2,380 per ton is about $570 million.

Even at nearly 300,000 tons, current inventories represent only about 2 weeks of supply, according to a Reuters Insider article. This tightness has been lending support to prices as automotive battery demand has continued to rise on the back of strong auto sales. According to Businessweek, auto sales in North America are still rising strongly in spite of poor house prices (previously a source of big ticket funding through refinancing) and high unemployment. The only cloud on the horizon being production losses that may result during Q2/Q3 from parts shortages due to the Japanese earthquake. Meanwhile, the WSJ reported auto sales in China, while slowing, are still rising in single digits. In the January-April period, overall auto sales grew 5.95 percent from a year earlier to 6.53 million units, while passenger vehicles sales rose 7.55 percent to 4.99 million units, the China Association of Automobile Manufacturers said.

However, it is fear that car sales could slow in the world’s largest auto market that are probably having the most significant impact on the market fundamentals. The market remains technically in surplus according to the ILZSG (International Lead and Zinc Study Group), but at 17,000 tons, the surplus is less than one day of global consumption. To what extent the ILZSG takes account of real rather than apparent demand is not clear; with traders like Glenore taking metal direct from Australian mines and delivering it to Asian warehouses, consumption could be said to be higher than it really is. Physical lock-up by large traders is supporting the backwardation or premium for cash metal that otherwise would almost certainly evaporate. Glencore has probably only come clean because of its IPO prompting greater transparency and a desire to have their assets valued at market, but other traders and hedge funds have no such imperative.

Standard Chartered expect prices for all industrial metals to recover as optimism in the global economy returns and lead to fare better than most as the current surplus is reversed by growing demand. A reduction in headline LME inventories would go some way to support that sentiment and will be a key metric investors watch to gauge likely future price direction.