One of my favorite things about running this site involves the plethora of information we receive literally from around the world. One of our favorite research services which we frequently write about, the Consumer Metrics Institute, has become Top-10 reading for us not because it necessarily accurately predicts GDP numbers, but rather because it provides us with specific insight to real-time (well, near real-time) internet consumer buying trends. Whenever I see consumer data presented by the US government, I know that Richard Davis of the Consumer Metrics Institute will provide some commentary to help explain why headline economic numbers don’t always tell the underlying story. Today, I’m particularly interested in exploring a dilemma that, on the one hand, appears positive for the steel industry, but on the other hand, does not necessarily bode well for the economy.

On Thursday, May 12, Gerdau Market Update, in their weekly summary examined consumer debt as a proportion to income. The report pointed to several trends for consumers including an increase in revolving debt (e.g. credit cards and home equity loans) twice over the past four months, another month of increased installment loans outstanding (installment loans serving as a payment vehicle to big ticket items think autos and white goods), growth in DI (disposable income) and a return to a historical norm of a key consumer ratio, namely consumer credit to DPI or disposable personal income (see link to chart here).

“The bottom line is that consumers have made great progress in wringing out the excesses of the last decade which is very good news for the economy as a whole and for future steel demand, according to Gerdau Market Update.

But have consumers made great progress in terms of wringing out the excesses of the last decade?

We’ll return to that question in a second, but as our friends at the Consumer Metrics Institute pointed out in a recent research note, the percentage of US consumers who were optimistic about the economy fell from 41 percent to 27 percent, according to a late-April 2011 Gallup poll:

In addition, Consumer Metrics Institute points to declining Household Sector Indexes which track purchases of appliances (well under 100, anything over 100 is considered growing), home improvement and decorating (though the recent trends look a bit more positive yet still well under “growth mode). Consumer Metrics Institute also reports home loans well under 100 and that finding would appear to conflict with government data suggesting home equity loans have increased. 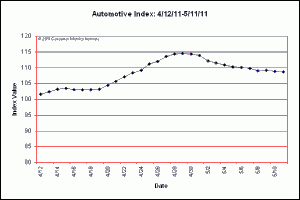 So what gives? The short of the long is perhaps both data sources are correct consumer sentiment may not appear “robust and as CMI points out, the fastest way to restore bad credit is to take out a loan for, say, a car or an appliance which would improve steel demand, supporting the comments made by Gerdau Market Update. Returning to the earlier question, have consumers made great progress in terms of wringing out debt? Yes and sort of, we’d conclude. Based on a ten-year analysis, we can see an improvement in savings rates: 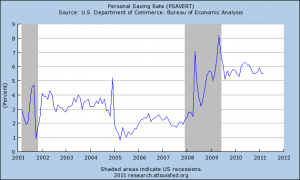 But based on a one-year analysis, the savings rate has started to decline again: 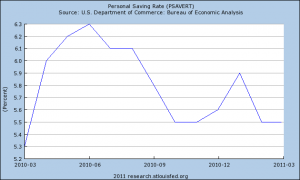 Then again, personal debt rates also appear to have moved toward historical norms: 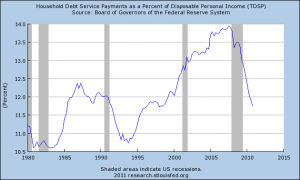 What should we conclude? Well, we’re still long on steel.