Iridium's Price Skyrocketing – What Does It Mean?

Generally we don’t spend much coverage time or space on minor metals, but the latest news in the iridium market made us perk up our ears. The price of iridium more than quadrupled last year, which put the precious metal’s price per troy ounce over $1000 and all-time high. Like other precious metals, namely platinum, palladium, and silver, iridium is not known primarily for its popularity as a hedge against inflation (ahem, gold), but for its industrial properties and uses. Just as platinum and palladium’s industrial demand continues to go up (due to their environmentally friendly function in catalytic converters in cars), demand for iridium is very quickly heating up, as it plays a role in LED screens.

The two-year graph for the iridium price shows the spike beginning in early 2010, and consistently rising throughout the year and into 2011. It broke $700 per ounce in the summer, then broke the $1000 mark earlier this year and continues to hold at $1050 today. 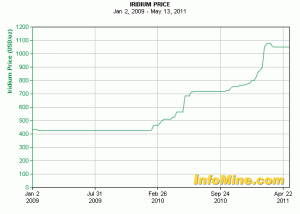 According to the Financial Times, iridium “is used in crucibles for growing crystals that are used in the manufacture of light-emitting diodes (LEDs). These, in turn, form the basis of backlit screens, which are essential in devices such as iPads and flatscreen TVs. As these products are in high demand all over the world, precious and rare earth metals are garnering a lot of mainstream media attention. Electrical industry demand for iridium rose to 194,000 ounces last year, 27 times the demand in 2009, according to Johnson Matthey, the PGM group that put out a report earlier this week in which these trends were disclosed. Overall iridium demand rose to 334,000 ounces. This is obviously good news for iridium producers Anglo Platinum, Impala Platinum and Lonmin, cited by the FT and Bloomberg.

“Iridium crucible manufacture expanded suddenly and rapidly during 2010, Johnson Matthey said in the report, as reported in turn by Bloomberg. “The small size of the iridium market helped amplify movements in the price as industrial buyers built their stocks of working metal in response to technology changes.

That’s the interesting thing about iridium and the fact that makes the importance of the metal quite real: the price increase is not reflective of investor speculation, but pure fundamentals. Back in early February, Johnson Matthey’s general manager for market research, Peter Duncan, called the price rise and told Reuters that the upward trend is “not speculative, there is real industrial buying driving it. One sector that’s a considerable driver of iridium demand, according to that report, is the chlor-alkaline industry, accounting for about 20,000 ounces.

But of course, the explosion in iridium demand and price will force buyers to look for substitutes, since the high market prices are not really sustainable for continued industrial use. Paul Walker, the chief executive of metals consultancy GFMS, told the FT that prices would have to fall back down to the $700 or $800 level to guarantee the metal’s place in various technologies.

“We’re on the cusp of an explosion in growth of LED applications, Walker told the paper. “The question comes down to what technology do you use to grow the LED crystals? That depends on the price point.

PREVIOUS POST:
Iron Ore Demand Seen to Be Easing in Asia, So Where To Next?
NEXT POST:
Zinc: Down But Not Out