Home | Commodities | Zinc: Down But Not Out
Commentary, Market Analysis

Zinc: Down But Not Out

Zinc has dropped significantly along with copper these last few weeks as stocks have continued to rise along with a massive surge in mine production   last year. One might be excused for thinking now is not a good time to be buying zinc and that the metal only has further to fall, but various reports suggest that the current weakness may not last much beyond the summer.

As Standard Bank recently advised clients, power cuts due to low water levels in some parts of China have restricted production and caused a drop in operating rates. Reduced mine output in some regions has also contributed to lower smelter operating levels in China, which, rather than a reflection of poor demand, are in fact laying the ground for price rises in the second half, according to a SMM Base Metal Briefing. As this graph from HSBC illustrates, over 50 percent of galvanized steel goes into construction industry, and over 50 percent of all zinc use is in galvanizing, making the metal as sensitive to the construction industry as lead is to automotive. 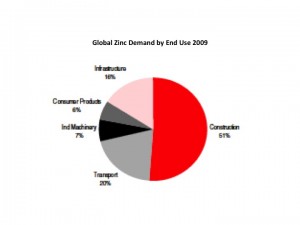 The galvanizing industry globally has been in good health with machinery, white goods and automotive all recovering well, particularly in China where galvanizers are running at about 88% of capacity. Construction, however, is still very weak in North America and Europe, and is slower in China than last year. Nevertheless, HSBC reports that combined North American, European and Japanese zinc consumption is still 16 percent below its 2008 peak, due almost solely to the weak construction market. Demand growth in Japan is now expected to be -1.8 percent this year, but reverse to +3.3 percent next.

Many point to the rising inventory levels as a sign that prices must have further to fall. 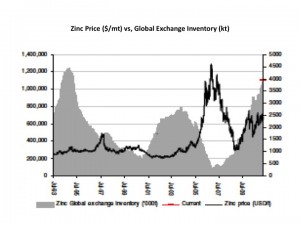 HSBC estimates the market will be in surplus this year to the tune of 340,000 tons with more to follow next year, but that by 2013, as major mines close, the surplus will likely reverse to deficit. The bank is not expecting prices to show much resilience form current levels this year, but is predicting prices above $2,300/ton for next year, a view echoed at least in terms of direction by a Reuters article last week. Construction is unlikely to suddenly turn around; the current weakness is due to many factors and sentiment is only part of it. Zinc demand is therefore relying on more of the same autos, white goods, machinery. With global growth set to slow this year, the recent falls in prices are justified, particularly when the cost of production at about $1500/ton is so far below the market, it is clear miners will continue to produce and smelters will continue to refine regardless of $100-200/ton fluctuations in metal price. Volatility and likely lower prices are therefore the order of the day this year, but if the current negativity proves as transitory as we expect then prices could well start to recover later in the year.