Though experts were quick to debunk the rumor that these specially trained dogs had titanium teeth implanted to make them more deadly after it was revealed that a war dog had aided the effort in killing Osama Bin Laden, these dogs still deserve some attention — and so does their special gear. You may have seen these amazing photo essays in Foreign Policy by Rebecca Frankel: War Dog Part I and War Dog Part II. If you haven’t, grab a tissue or two before you take a peek. Military dogs have accompanied our troops into battle officially since Vietnam (when they were categorized as “surplus equipment and left behind!!) and unofficially since who-knows-when. What does this have to do with metal and sourcing, you ask? Read on. 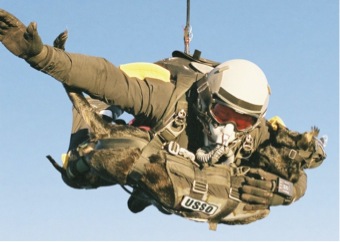 According to the Homeland Security Newswire, “After six years and nearly $19 billion in spending, a Pentagon task force assigned to create better ways to detect bombs has reached this conclusion: The best bomb detector is a  dog. In fact, “…the most sophisticated detectors JIEDDO could come up with tend to locate only 50 percent of IEDs in Afghanistan and Iraq. When soldiers are accompanied by bomb-sniffing dogs, this number goes up to 80 percent. Dogs proved their worth in keeping soldiers and civilians safe; the US Military has actually awarded huge contracts to a supplier in Canada, K-9. “Contracts for providing the military with explosives, narcotics, and cadaver detection dogs, as well as patrol and sentry dogs, are becoming lucrative, with one contract reaching $44 million and another, just a month ago, $34 million, says John Ensminger, author of Police and Military Dogs: Criminal Detection, Forensic Evidence and Judicial Admissibility.

Just like their human counterparts, these extreme dogs require extreme equipment to do their jobs safely. After all, they’re doing everything from jumping out of planes to entering highly dangerous combat situations. Here’s where the metal comes in. Check out the K9 Storm Intruder: 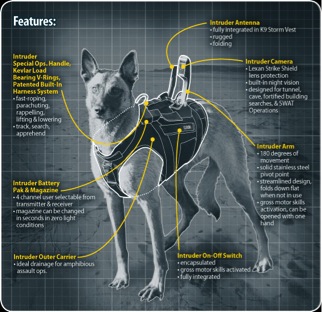 These vests contain “ballistic panels…made of Kevlar 129. The result: a lightweight, extremely flexible panel that maintains its ballistic integrity in even the most demanding circumstances. The Patrol-Swat Vests also offer slash and stab protection against a range of wide blade common street knives. Furthermore, the intruder arm, made of solid stainless, allows for a camera to be placed on the vest so handlers can see what the dog is up to from safe distances. It’s a fascinating use of metals in a way that protects animals and humans alike. Plus: Doggles!