Home | Commodities | China and Inflation: The Drivers and Effects

China and Inflation: The Drivers and Effects

After a spirited comment-and-response on the previous post in this series and some subsequent thinking about the main drivers of global prices, it may be time to look at Chinese inflation once again. Clearly, the inflation picture in China is giving many bankers, investors and American consumers a scare, because the era of cheap goods may be coming to a close. Relatively unchecked GDP growth in double-digit percentages have cooled to just below 10 percent annually the past couple quarters, but that doesn’t mean that China’s domestic demand for goods, services and infrastructure has stopped. China’s Leading Economic Index (LEI), put out by the Conference Board, gradually climbed above the 150 mark toward the end of 2010, and rose sharply in March 2011 peaking at 157 (following a 0.3 percent increase in January and February). An all-encompassing index, the LEI takes PMI numbers and other economic indicators into account to gauge economic strength: 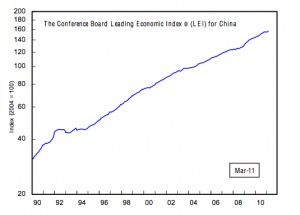 Source: The Conference Board

As one can see, China has shown no sign of slowing down; in many ways, the ebb and flow of Western, namely American, consumer demand has dictated the health of China’s exports; so who would have thought that the domestic situation in China would have brought historic price increases that threaten the above growth curve?

By “domestic situation we mean the dynamic between workers’ economic needs and what the government and state-run enterprises in China can allow, highlighted by a Wall Street Journal article. Firms in China have basically been forced to increase wages based on the Foxconn Effect, according to the article. In line with Trevor’s recent comment on a previous post, this case essentially highlighted corporo-government appeasement of workers. Foxconn, aka Hon Hai Precision Industry Co., makes iPads for Apple, and raised wages “30 percent or more in the wake of several worker suicides. It was a move in response to questions about employee treatment, and this is just one case of many in which China is trying ever harder to put its “corporate social responsibility face on. (The article also mentions Honda Motor Co. employees went on strike for higher pay.)

The Chinese government is between a rock and a hard place, both in its relations with industry and with its labor force. Cheaper labor is still available away from the coasts, but that means operations will have higher costs to move inland. The government wants domestic consumers to spend more, but with those consumers being burdened with aging family members, they need to make more money in large part because of higher commodity prices. China’s headline CPI was 5.3 percent in April, well above the official target rate of 4 percent, while food inflation clocked in at 11.5% in April, the sixth month of double-digit percentage increases.

Most interestingly, a political policy may be the key Jenga piece in China’s downfall:

“Many analysts predict that China’s vast labor force will begin declining in the next year or two, the result of family-planning policies. Others say there’s already a shortage of the most active members of the factory floor, workers aged 15 to 34. That group has been steadily declining since 2007, according to Jun Ma, Deutsche Bank’s chief economist for Greater China.

PREVIOUS POST:
Do War Dogs Have Titanium Teeth? No – But They Have Some Sweet Metal Gear
NEXT POST:
Why Oil and Silver Prices Dropped and What It Means For Commodity Prices Going Forward