A fascinating special report by Reuters this week tracks the fortunes of oil and silver over the last few days and reads more like a novel of Wall Street trading than Reuters’ usual analytical style. Not that the report is sensationalist; more that the price falls it reports are sensational and, by most observers, unexpected. 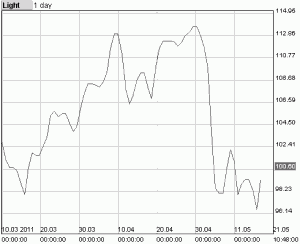 As the author Joshua Schneyer of the Reuters article explains, never before had crude oil prices fallen so steeply during the course of one day. At one point on Thursday, May 5, prices were off nearly $13/barrel, and since then prices have fluctuated, but continued to fall. Nor was oil alone: silver has experienced an even more precipitous fall, 20 percent during the week and 30 percent to date — the largest one-day price drop since 1980.

So what prompted the rout in prices? That’s were the fun in the Reuters article comes in — no one is sure. The major market makers and hedge funds seem as bemused as analysts and investors. Certainly George Soros’ reported selling of silver positions no doubt had an impact on that narrow market. Goldman Sachs may have contributed to the sentiment by advising clients in late April to pare back oil positions, correctly predicting a $20 fall in prices. Mostly likely a combination of negative factors — prominent commodity bulls turning bearish, some weak economic data, cheap money from the US Federal Reserve ending by July, a lessening of political risk — conspired to create a sense of “let’s take profits now. A proportion, perhaps as much as 20 percent, of the oil price was down to perceptions of political risk, although global oil demand is strong, OPEC has been saying for months there is enough oil to go round, and oil stocks have been high, supporting their position. Sarah Emerson at Energy Security Analysts is quoted as putting it rather succinctly: “We’ve been in a world thinking there’s more risk, more risk, more risk. People this week stopped and said, maybe there’s less risk.”

But while these factors may have initiated the sale, the speed and depth of the sell-off, it appears to have a lot to do with computer programs designed to readjust positions to price movements. High-frequency, computer-initiated trading and algorithmic trading accounts for about half of all volume in oil markets. As prices fall, complex programs adjust positions if trigger points are hit. Exchange data shows that the total number of open positions in the oil market rose during the day when the exact opposite would be expected in a typical sell-off. Normally, panicky funds selling oil en masse would cause total “open interest” numbers to shrink, as exiting investors closed out contracts. But some machines, following the market trend, may have gone further, by dumping long positions and quickly amassing sizable short positions instead.

Nor was the oil price the only one affected: metal and other commodity prices also came off. The Reuters Jefferies CRB index, which follows 19 major commodities, was on its way to a 9 percent weekly drop, the biggest since 2008. This Reuters graph illustrates the degree to which the one-year long-term trend line has been “violated by May’s drop; the question now: is this a turn of direction or a temporary adjustment? 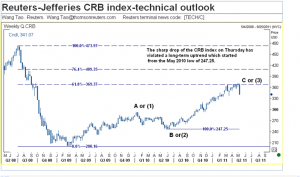 Most feel it is a short-term lull and will last through the summer, that the longer-term fundamentals for emerging markets and western world growth remain positive, and that as a result, commodities have only one way to go. But like all classic tales, the events of this month have shown that just as we think we know the plot there is a new twist around the corner to keep us guessing what’s going to happen next.

PREVIOUS POST:
China and Inflation: The Drivers and Effects
NEXT POST:
Worries of Resurgent US Manufacturing Tanking Again Soon