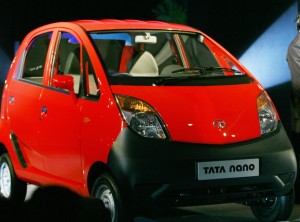 Selling cars from Tata, Suzuki, Hyundai and Chevrolet, India has emerged as most competitive market for the small car segment. The domestic market for small cars now occupies a substantial share, around 70 percent of the country’s annual car production of about one million.

The success story of the small car segment in India can be seen through two prisms: while on one end, the growing domestic market is attracting foreign car makers, on the other, established domestic players are positioning themselves as strong contenders to offer low-cost car manufacturing capabilities to the world.

With an extremely low penetration rate and a rising middle class with increasingly high disposable income, India becomes the favorite destination for global car companies to expand their global operations.

Furthermore, in India, the car prices have remained relatively flat over the years (adjusted for the decline in duties) compared to steadily rising per capita income levels.

Small-car manufacturing began in India in 1983 with the launch of the Maruti 800. As India opened its economy in early 1990s, most of the global car manufacturers entered India and within a few years they set up their manufacturing plants. Today, all the big players in the car industry are well set in India and expanding regularly. Most of the carmakers are selling their cars, especially small cars within India, and they are also exporting the small cars to other countries.

However, the launch of Tata’s Nano the world’s cheapest car in 2008 started a new type of competition in the small car segment. It is expected that more and more foreign companies are likely to join the healthy race in the Indian small car market. All the automobile companies in India that have forayed into the production of small cars are trying to out-do each other in terms of design, innovation, pricing, and technology, to gain market control.

Hyundai is next in line.

(To be continued in Part Two.)