Home | Commodities | US Aluminum Production Down, Zinc Up, and the Rollercoaster for Domestic Construction Continues
Industry News

US Aluminum Production Down, Zinc Up, and the Rollercoaster for Domestic Construction Continues

With all the ups and downs in the construction and housing markets recently, it may be hard to make heads or tails of where prices are going to go with any consistency. For the latter half of 2011, most analysts generally agree that volatility will continue, especially in precious and base metals markets. On the construction side of things, countless indicators — two of which come from the USGS and Reed Construction Data — gauge the demand for new infrastructure as we move forward. Of critical importance: the US numbers (as the emerging world continues its growth tear with merely a hiccup or two).

First off, the USGS Mineral Industry Survey reported a 2 percent decrease in US secondary aluminum production in Q1 2011, down from the previous quarter (Q4 2010). US aluminum was also down 6 percent year-over-year. Although iron ore was down 11 percent in Q1 2011 from Q4 of last year, US production of the increasingly pricier raw material in Q1 jumped 25 percent year-on-year “because of increased demand for steel, as economic activity increased from its level in the same quarter 1 year ago, according to the USGS survey. And zinc, the only metal posting increases in both categories, was up 4 percent year-over-year, and 5 percent since Q4 2010 although the global zinc market remains in somewhat of a surplus.

Below is the extended USGS table of construction-related commodities by quarter: 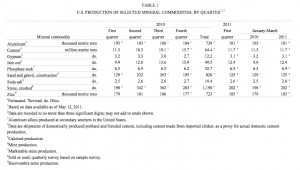 Another source, Reed Construction Data (RCD), painted another forward-looking picture from April’s data based on the graphs below, highlighting the better performance of metals versus the field: 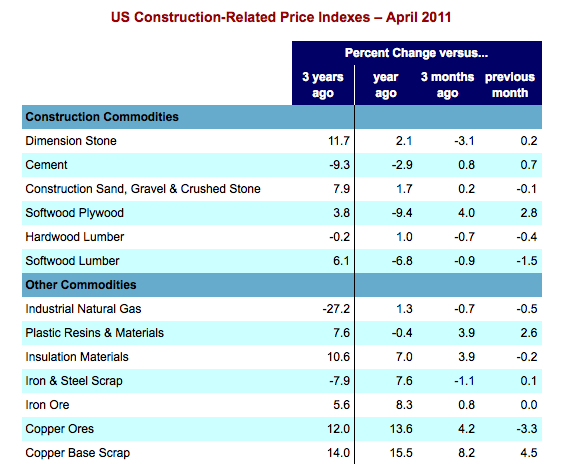 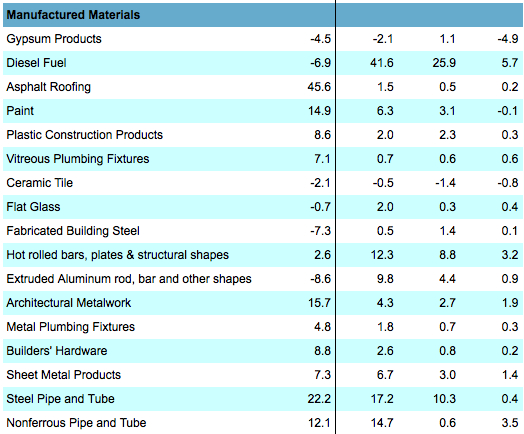 Jim Haughey, RCD’s chief economist, noted the significant increases in nonferrous pipe and tube and structural steel, as well as the effect of higher energy prices. “The spike in energy and food prices is now boosting prices for all items in the index via freight rates, fuel surcharges and higher business operating costs, he wrote, continuing, “construction inflation will probably dip below overall inflation in the next few months but will be back above the overall inflation pace in the second half of the year because of the high share of commodity imports in the construction material price equation.