The Institute of Supply Management (ISM) in its monthly report covering May on manufacturing activity in the United States, shared a couple of data points that may indicate some worrying trends. But first the good news the manufacturing sector continued to expand for the 22nd month in a row turning in a PMI reading of 53.5% (a number over 50 suggests economic growth). Many of the indicators continue to tell a positive story about the US manufacturing economy. In particular, employment continues to grow and 14 of 18 manufacturing industries reporting results indicated growth including all metal related sub-sectors.

So that’s the good news. The most disturbing aspect of the latest ISM report involves two elements. The first the rate of change in most of the key sub-components PMI down from 60.4 in April to 53.5, production from 63.8 in April to 54 in May, order backlogs from 61.0 in April to 50.5 in May all appear worrisome because any drop of similar magnitude between June and May would push some of the indicators into a “contracting vs. “growth position. We should also note that “50 does not represent growth/contraction across all of the indicators so a reading below 50 does not necessarily indicate contraction. The second trend we find disturbing involves which indicators suffered from the biggest drops particularly production and new orders.

The ISM data combined with several other less-than-rosy indicators suggests to us the economy may have gone into a little lull (hopefully just that): 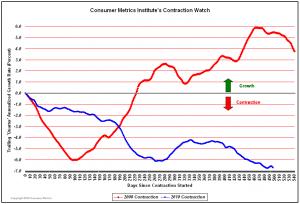 Yet the media has portrayed this far more negatively:

“Back Towards a US Double-Dip

“Horror For US Economy as Data Falls Off Cliff

Some have even said we’re on the verge of a great great depression! After all, JP Morgan has downgraded US GDP twice in the past week.

Before we hit the panic button, we go back to the folks at ITR who predicted in late 2010 that we’ll stay out of recession. Let’s hope they are correct!

PREVIOUS POST:
China Imposes Health Care Tax – Is This Enough to Reshore US Manufacturing Operations?
NEXT POST:
China Vs. India – See Which Economy Comes Out On Top