Last week was an interesting one for some of our less frequently followed metals — both rhodium, a PGM, and titanium sponge, used primarily in the aerospace industry, saw unprecedented activity.

Unprecedented for rhodium meant the first-ever physically backed rhodium ETF (or, more aptly, exchange-traded product, i.e. ETP) released by Deutsche Bank AG. Although there’s no word from Deutsche Bank on initial flows, the FT reported that the bank hopes to attract $30-$60 million of rhodium investment in the past year, accounting for “15,000-30,000 ounces of rhodium demand, compared to annual supply of 750,000 ounces.

The ETF release, coupled with other buying activity in the wake of Asian sell-offs of rhodium, caused a 20 percent increase in the rhodium price to $2350 per ounce, according to the FT. This is still lower than the $2500 mark achieved earlier this year (see chart below), which was still only a quarter of the all-time record high of $10,000 an ounce in January 2008 after the South African supply crisis (second chart). 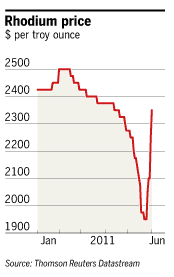 The gray PGM is used primarily as a hardener of platinum and palladium inside auto catalytic converters. Johnson Matthey also cited that gross rhodium purchases for use in auto catalysts rose by 105,000 ounces to 724,000 total in their 2010 report, as relayed by Kitco News; at the same time, rhodium recycling from used auto catalysts increased by 26 percent. Rhodium is also used in chemical and glass manufacturing sectors.

From One of the Hardest Metals to a Sponge

Meanwhile, titanium sponge saw its biggest increase since early 2008, according to a Reuters Metals Insider report.

The most significant factor in the price increase on the supply side, according to traders who spoke with Reuters, appeared to be a reduction in Chinese exports of titanium sponge China is the No. 1 producer. The metal is included in China’s “strategic metals definition, hence their clampdown on exports.

What to Make of It?

While much of this activity can be attributed to the cyclical nature of markets, there are a couple things to keep in mind:

PREVIOUS POST:
Vale to Lead Brazil Into Rare Earth Mining
NEXT POST:
Why Cobalt Is Not a Conflict Mineral