A bit of a lesson in supply chain management of sorts is under the microscope in the aluminum market these days. And it seems to center on the Motor City.

The ‘supply chain’ issue the terribly long wait times for loading out the physical metal from Detroit-based LME warehouses, as reported by Reuters’ Andy Home. Current LME warehouse load-out rates, he writes, are at six months.

(See how this ties into physical metal ETFs in a previous MetalMiner story.)

According to Reuters, Detroit warehouses hold a whopping 25 percent of the LME warehouse system’s aluminum stock (which, at the end of last month, stood at about 1.17 million tons). The tonnage of Detroit metal awaiting load-out nearly doubled between its 2010 peak and current levels, rising 97 percent. From Sept. 2008 to the start of 2011, those stocks rose 372 percent.

The LME conducted a study to get to the bottom of this issue, which came out last week. They gave several reasons, among them that post-2008, concerns about getting metal into warehouses to prevent supply constraints; and that Detroit warehouse owners were offering incentives and outbidding others for fresh metal.

Weirdly, according to Reuters, aluminum stocks in Detroit are still growing even though industrial demand appears strong. “It has accounted for over 30 percent of all deliveries out and over 40 percent of cancellations in the system this year, Home’s article states. “Right now it also holds 50 percent of all the canceled tonnage in the system. You can see this disparity in the graphs below: 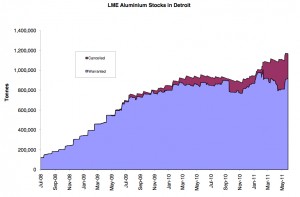 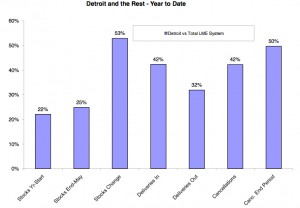 What It Means for Buyers

“Bad news for you the buyer, particularly if you actually need the metal right now, Home writes.

Because of the warehouse system structure, most buyers must go through Detroit. But the wait times mean that one will have to incur greater costs. This is because, as Home explains, the load-out “queues are essentially nullifying the arbitrage between the LME and the physical market arbitrage ends up costing more because you must pay rent on the metal while it’s in the queue, and the length of wait time, at this point, is a big fat unknown.

Also, in terms of the rest of the total LME tonnage, the authors of the LME study pointed once again to the amounts of aluminum tied up in finance deals (or Ëœcash-and-carries’). Due to the way these work, many warehouses are not involved in finance deals, the warrant cancellation distribution gets skewed to others and that’s where aluminum ends up being concentrated.

The disproportionally large percentage of LME aluminum being held in Detroit is the only reason that these backups may be good for buyers to watch; this could be a driver in the metal price going up. Whether aluminum demand at this point is real or not, when the true rush does hit, this small link in the supply chain could have a pretty big effect.

Also, sign-up for a Free Trial to Harbor Aluminum!