One could be forgiven for thinking that ever since the Fukushima Daiichi nuclear power plant disaster, the global nuclear industry would be dead in the water. Indeed, the reaction of Angela Merkel’s center-right party in Germany is the least dramatic of several in her country, calling for closure of all the country’s nuclear power plants by 2022; some of her opposition were suggesting closure by 2017. Nuclear power provided 23 percent of Germany’s electrical power at the start of this year and no clear economic alternative exists to replace this capacity.

However, a highly readable report on the future of nuclear power by the Economist Intelligence Unit (EIU) concludes that with a few notable exceptions, such as Germany, most countries are still committed to nuclear power and that by 2020 the world will be producing 27 percent more GW of power from nuclear than it did in 2010. 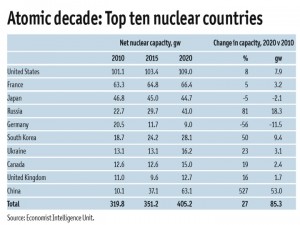 The winners and losers (and your definition of each may depend on how strongly you support nuclear as a power source) can broadly be seen as those with growing as opposed to static power demands. In most cases, the really significant gains are planned by those countries that really have little alternative if they are to make any reasonable attempt to control carbon emissions and pollution.

The report reviews each of the major nuclear power-generating countries in turn and analyzes the prospects for nuclear over the rest of this decade. Surprisingly even countries like Russia and Ukraine, which are major hydrocarbon producers and could easily meet their energy needs from natural gas or coal, are still opting for nuclear (maybe with the rationale that they have established domestic nuclear technology and industrial champions, and can sell their hydrocarbons abroad for much needed foreign currency.)

Of greater surprise in the report is the scaling back of China’s nuclear ambitions. The country is said to have 27 reactors under construction and was planned to increase capacity from 10.1 GW in 2010 to 70 GW by 2020, a massive engineering, supply chain and training challenge. More for these reasons than the incident in Japan, the EIU is predicting China will “only manage a six-fold increase in capacity to 63.1 GW. Although none of China’s reactors are planned on seismic hot-spots or at coastal sites at risk of tsunamis, the country has instigated a review of its nuclear policy, which will likely drag on until the end of the year and contribute to the undershoot in total GW capacity construction.

Maybe because we have come to expect China becoming the dominant consumer and/or producer in so many spheres, the EIU’s projection that the US will remain the largest producer of power from nuclear reactors came as something of a surprise. The industry in the US has been the subject of considerable political polarization and vacillation. As the report states, there is no appetite to subsidize the industry in the way there is for renewable sources, and yet even post Fukushima, total GW produced in the US is expected to increase with the addition of some 8 GW following the commissioning of five reactors under construction and the upgrading of many more existing reactors.

Add to this the increasing interest in nuclear power by minor developing countries, for example Bangladesh and Jordan — which are likely to be just the tip of the iceberg — and nuclear power looks far from dead. The landscape has become markedly more competitive with the arrival of new players such as the South Korean industrials, Korea Electric, Hyundai and Samsung, but the lower cost options they have brought to the Middle East in recent tenders may actually widen the potential market for nuclear power in an increasingly carbon-conscious and yet power-hungry world.