According to the Seattle Times, elevated levels of lead in American children have been reduced from 88 percent of those tested to just 1 percent since 1980. Note the phrase “elevated levels” here — these aren’t cases of lead poisoning; the authorities have been testing for decades how even low levels of lead are extremely harmful for children’s brain development and neurological functions.

A Human Rights Watch report this month said the ingestion of high levels of lead can cause brain, liver, kidney, nerve, and stomach damage as well as anemia, comas, convulsions, and even death. Children are particularly susceptible, and high levels of lead exposure can cause permanent intellectual and developmental disabilities, including reading and learning disabilities, behavioral problems, hearing loss, attention problems, and disruption in the development of visual and motor functioning.

The report, covered in the NY Times and available in full from the HRW website, catalogs incidents of ongoing lead poisoning in China over the last two years, some of which are summarized in the following map: 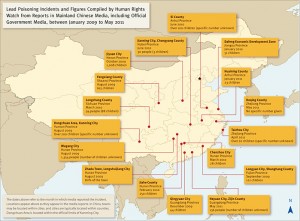 The really significant finding from this report isn’t that lead poisoning occurred, although good plant design and operation could prevent it, but that the authorities and plant owners continually try to hide the extent of the problem and deny workers and local residents access to the medical services required.

In the words of Joe Amon, health and human rights director at Human Rights Watch, “children with dangerously high levels of lead in their blood are being refused treatment and returned home to contaminated houses in polluted villages. Parents, journalists, and community activists who dare to speak out about lead are detained, harassed, and ultimately silenced.

The West has repeatedly taken action against regimes around the world that act with flagrant disregard for their own citizens’ safety when in pursuit of some military aim such as Gaddafi’s Libya or Bashar al-Assad’s Syria. True, the West’s approach is often hypocritically selective, picking on examples where it feels it has a strategic interest and ignoring those that it does not, but what is the difference between a regime harming its citizens through military means and harming its citizens through mass poisoning in pursuit of economic means?

Beijing would claim it has tried to stamp out environmental incidents like lead poisoning by clamping down on plant operators, but it’s ridiculous that a country with the most successful centrally planned economy in the world cannot control its own provinces and manufacturing plants. It is clearly not considered important enough to tackle this ongoing disaster, but if this many casualties resulted from military action, calls would be heard to prosecute leaders for war crimes. Why do Western firms apply rigorous rules against child labor, yet accept Chinese lead products that have caused more suffering than children working in sweat shops?

A Problem With Wide Reach

China’s lead industry has grown by 20 percent per year for the past five or six years, according to the NY Times, and is expected to expand further. Wang Jingzhong, vice director of the China Battery Industry Association, is quoted as saying China now has some 2,000 factories and 1,000 battery-recycling plants, making it a chaotic situation for regulators. The chaos results from not having enough inspectors, not enforcing their findings and probably from widespread corruption among local administrators, inspectors and plant owners.

HRW estimates the number of children affected could run into millions, but says that while the government is waking up to the problem, they have still failed to do anything meaningful about it.  Maybe the most poignant epitaph to this tragedy are the words of Han Zongyuan, on learning that his only child, a 3-year-old daughter, had suffered brain damage because of lead pollution from a factory in his village in China (reprinted from the NY Times Quote of the Day): “We wanted this child to have everything. That’s why we worked this hard. That’s why we poisoned ourselves at this factory. Now it turns out the child is poisoned too. I have no words to describe how I feel.”

Western lead consumers have a responsibility, just like textiles buyers had with child labor, to find out where the lead in their products comes from and take action if it comes from China. Only economic actions appear to have any impact on Beijing.

PREVIOUS POST:
Copper Imports and Prices Down, But Not Out
NEXT POST:
Why Manufacturers Operating Offshore Must Consider Total Cost of Ownership – Part Three