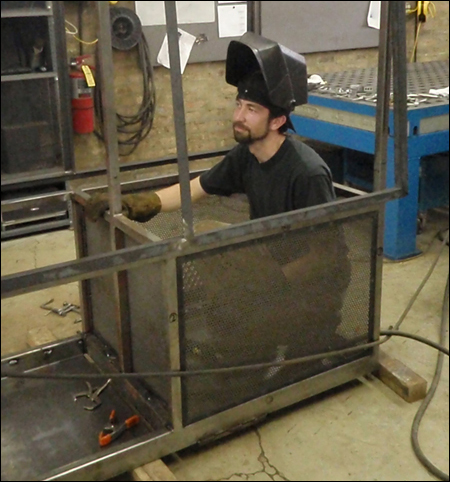 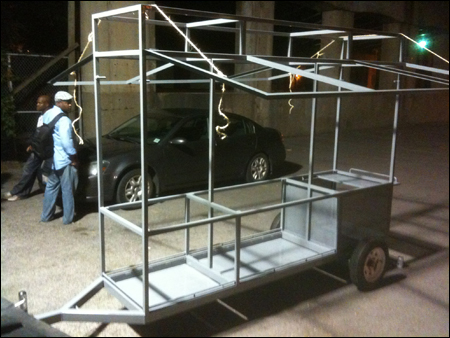 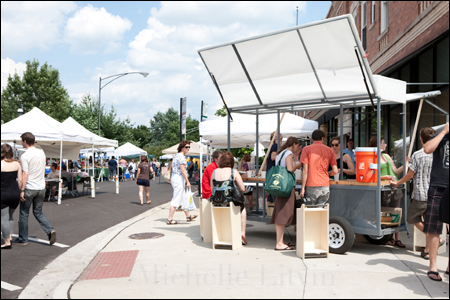 Q: What are some of the trailer’s functional highlights?

A: The main mobile trailer unfolds to create a welcoming, intriguing, inviting space supporting a variety of programming. The hinged “wings open partially to create a shade canopy or protected space for demonstrations, shared meals, and other programs. When fully extended, the canopy wings transform into a movie screen, a large marquee, or a message board. When closed, the sailcloth sheath becomes a traveling billboard. Also, the tabletop encases storage space below for modular cabinets, designed as flexible seating at the harvest table or storage drawers that fit neatly within the bike trailers. 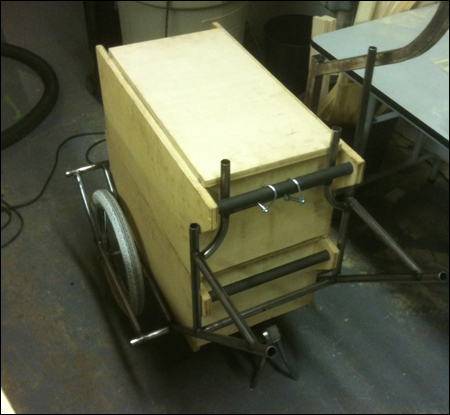 Q: The trailer is a part of a delivery system. What other objects work together with it?

A: Our bike fleet, outfitted with custom trailers (see above image), designed by the MFC team and fabricated by Adam Clark of Pedal to the People, provides satellite programming for events, and also transports tools, produce or a number of other items in the plywood storage modules. These simple, yet sleek “mods were designed and built in-house at the Archeworks studio.

Q: What main materials were selected and used for the trailer?

Q: What fabricators played a role in the trailer-prototype’s realization?

Q: How did time factor into its creation?

A: We were working with three time considerationsâ€Biennale (documenting the structure for the film “Gather, Give, Grow by Chicago-based design collaborative Thirst and other exhibit materials), Chicago eventsâ€completing the structures for the project’s debut in community programming, and Crosstree’s available shop timeâ€in order to meet our deadlines and juggle their other projects, they squeezed us in on weekends and after hours.

Q: Was there a part of working on the trailer concept that was particularly trying and how did you deal with it?

A: It was somewhat challenging trying to create some of our details/desired functionality with pre-manufactured partsâ€we went custom instead, inventing solutions on the fly with the help of Travis and his team.

Q: What’s next for the Mobile Food Collective and how can people find out about it?

A: Archeworks is in discussion with several local groups, including an urban farm, to integrate the MFC with ongoing programs, which include several youth development initiatives. People can learn more about program plans by checking the Archeworks website.

PREVIOUS POST:
Design, Food and Metal: Archeworks' Mobile Food Collective – Part One
NEXT POST:
Nickel and Stainless Steel Prices Both on a Slide