Got Metal? Order a Hearty Bacon Omelet With a Warm Cup of Joe

In an NPR News story, “Breakfast At Libertarian Summer Camp, Planet Money journalist Robert Smith made a breakfast-time visit to PorcFest (Porcupine Freedom Festival) on 116 forest acres in New Hampshire’s mountain area. The event is geared to “those that love freedom and individual liberty. Smith’s visit included the purchase of goods without U.S. government currency, but with metal. He observed, “a cash register stocked with tiny pieces of silver and gold.

Smith noted attendees “checking the precious metal prices on their cell phones. A sign there advertised “a cup of coffee and a bacon-weave omelet. $3.95? Nopeâ€the price was “five grams of silver. He earlier converted twenty dollars for approximately ten grams of silver, which was dispensed in coins and laminated strips. The Thai food vendor at the event preferred the latter.

Aside from gold and silver, copper and platinum metals have also been used as currency throughout history, and before the time of Christ. Gold coins such as these depicted Alexander the Great: 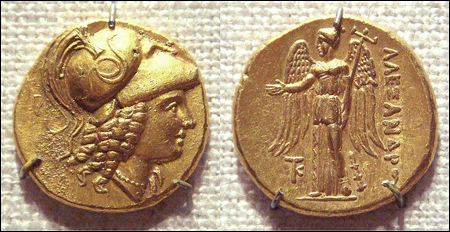 These weren’t most likely exchanged at today’s PorcFest, but they were exchanged at PorcFest-related gatherings during ancient times at its issuance. Metal, as a “medium of exchange, is also a medium of ideals, political and otherwise. There is no separation between metal and the manifesto it represents. When Smith received his exchange of silver, it wasn’t just silver, it was libertarian silver.

PREVIOUS POST:
US Ends Ethanol Subsidies and Moves to Open the Market for Global Trade
NEXT POST:
Advanced Copper Fabrication Methods – For the Time